RCN Fairey Gannet AS. Mk1 VS-880. A 'what if?' re-paint for Rob Richardson's Fariey Gannet 'kerosene converter' (it converts kerosene to noise!). The Gannet was evaluated by the RCN in the mid '50's as an Avenger replacement in the ASW search and strike role, but the Tracker was selected as Faire...

RCN Fairey Gannet AS. Mk1 VS-880. A 'what if?' re-paint for Rob Richardson's Fariey Gannet 'kerosene converter' (it converts kerosene to noise!). The Gannet was evaluated by the RCN in the mid '50's as an Avenger replacement in the ASW search and strike role, but the Tracker was selected as Fairey would not license production in Canada. We can, however, visualize an alternate history through the magic of FlightSim. An RCN Gannet in VS-880 markings, HMCS Bonaventure, 1958. By Mike Barnes.

Lots of features,double Mamba sound, and free, too.

The Gannet was built in response to the 1945 Admiralty requirement GR.17/45, for which prototypes by Fairey (Type Q or Fairey 17, after the requirement) and Blackburn Aircraft (the Blackburn B-54 / B-88) were built.

After considering and discounting the Rolls-Royce Tweed turboprop, Fairey selected an engine based on the Armstrong Siddeley Mamba; the Double Mamba (or "Twin Mamba"). The Double Mamba was basically two Mambas mounted side-by-side and coupled through a common gearbox to counter-rotating propellers. Power was transmitted from each engine by a torsion shaft which was engaged through a series of sun, planet, epicyclic and spur gears to give correct propellershaft rotation and an acceptable reduction ratio.The ASMD.1 engine (2,950 hp/2,200 kW) was used in the Gannet AS.1; ASMD.3 (3,145 hp/2,345 kW) in the AS.4; and ASMD.4 (3,875 hp/2,889 kW) in the AEW.3 variant. The Double Mamba engine could be run with ½ stopped to conserve fuel and extend endurance for cruise flight. The counter-rotating propellers meant that when only ½ of the Mamba was running, there were no asymmetry of thrust problems encountered. The Mamba exhausts were situated on each side of the fuselage, at the root of the wing trailing edge. The gas turbine engine can run on kerosene, "wide-cut" turbine fuel or diesel fuel, allowing the Admiralty to eliminate the dangerous high-octane petroleum spirit required by piston engines from carrier operation.

The pilot is seated well forward, conferring a good view over the nose for carrier operations, and sits over the Double Mamba engine, directly behind the gearbox and propellers. The second crew member, an aerial observer, is seated under a separate canopy directly behind the pilot. After the prototype, a second observer was included, in his own cockpit over the wing trailing edge. This addition disturbed the airflow over the horizontal stabiliser, requiring small finlets on either side. The Gannet has a large internal weapons bay in the fuselage and a retractable radome under the rear fuselage.

The Gannet's wing folds in two places to form a distinctive Z-shape on each side. The first fold is at about one third of the wing length where the inboard anhedral (down-sweep) changes to the outboard dihedral (up-sweep) of the wing (described as a gull wing). The second wing fold is at about two thirds of the wing length. The length of the nose wheel shock absorber causes the Gannet to have a distinctive nose-high attitude, a common characteristic of carrier aircraft.

The weapons bay doors are on the spoiler key=/
Wingfold = Ctrl/f
Hook =Shift/q
canopies =shift/e
Radar canopy =Shift/e then 2
steps =Sift/e then 3
External fuel tanks and weapons will appear/disappear by adding or removing fuel from external 81gal tanks, from in game fuel and payload menue.
Torpedos, add/remove by adding or removing their own weight in payload section.

Installation: Unzip the texture file to the Gannet folder. Open the config.file with notepad, copy and paste the entry [fltsim.xx] below next in sequence and renumber.

Well done and a large BRAVO ZULU to Mr. Richardson for all his hard work.The Gannet has been done justice.
This file is freeware and may not be used for profit.
Original model by Rob Richardson
Repaint:3/7charlie 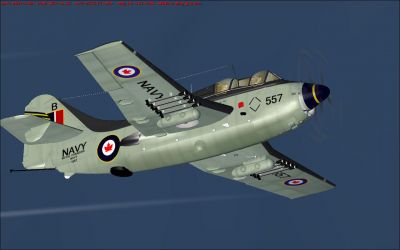 The archive fsxgannetrcn.zip has 14 files and directories contained within it. 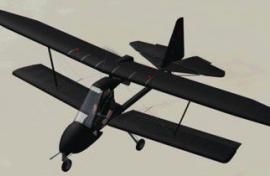