All of the add-ons here are freeware, you don't even have to register to download, however, membership comes with many benefits including downloading files at full speed so that you don't have to wait - more information about a registered account here. The most popular add-ons are aircraft; there are literally thousands of repaints and models available. There are even repaint kits, where a user may download a blank repaint pack and create their own custom aircraft with a livery of their choice and design.

Scenery expansions are also becoming increasingly popular and users will be able to find them here too; from global mesh scenery to missing airports. You may browse our categories below, or use the search function of our library. Each flight sim expansion has a description and image to preview the add-on in the sim.

The Fly Away Simulation library is quite possibly the only complete all-in-one library online for MSFS, FSX, FS2004, P3D & X-Plane. Files are added daily, and the library is continually growing. With the release of Lockheed Martin's Prepar3D package, you will also find that pretty much all of the FSX downloads work with it too.

There are tutorials in our Flight School with guides on how to install the add-ons, visit the Flight School for installation help.

Microsoft Flight Simulator X, or as it's known within the community as FSX, is the latest released version of their flight simulator package for Windows computers.  This has become the standard in PC simulation, with an estimated 75% of the market using this package.  The package is designed for a whole range of PC simulation uses, including fun flights for complete novices to IFR and navigation practice for trainee real-life pilots.

The add-ons we cover for FSX include aircraft, scenery and many utility files that enhance your simulation experience and enable you to play for longer with a wider range of scenarios.  FSX downloads are our main attraction here at Fly Away Simulation. 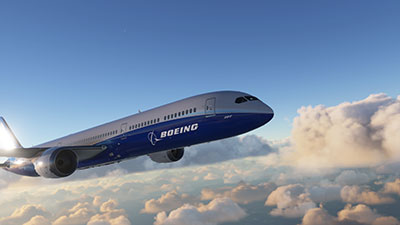 A Boeing 787 in flight over clouds. Screenshot from the new Microsoft Flight Simulator (MSFS) 2020 release.

Microsoft Flight Simulator, abbreviated as MSFS but also known as FS2020 by many veteran flight-simmers is the latest flight sim package released by Microsoft on August 18th, 2020.  This new sim is set to become the most popular and widely adopted sim.  It's a complete rewrite and is not based on any legacy engines like FSX or FS2004 - it has been rewritten from the ground-up with a new engine and core code.

As it's a new release, freeware mods and add-ons are being released slowly.  None of the previous files compatible with previous versions work in the 2020 release so it's much harder to port them over - they have to be rewritten.  Having said that, developers are hard at work on creating mods for this new version.

Like all previous versions, we will continue to offer freeware files as they become available.  These will (like previous versions) include aircraft repaints and new base models, scenery expansions such as new airports and reworked airports, utilities and tools.  This new section is likely (over time) to become the most popular on the site.

The image shows a Saab 37 military aircraft flying over the French Alps. The screenshot was captured from X-Plane.

X-Plane Flight Simulator, developed by Laminar Research, has always been the simulator of choice for aviation professionals and professional simulator developers.  This was usually the simulator used in commercial simulators and to train pilots for real-world scenarios because it was more customizable in these situations.  When Microsoft announced the closure of the ACES studio (the team that developed Microsoft's Flight Simulator), the community was more open to change and adopted the use of other simulation packages on the market.  X-Plane has always been there, but only at the back of the minds of MSFS users.

While we cover a lot of X-Plane 11 mods here, it's worth nothing that pretty much all of them will work with the brand-new (September 2022 release) of X-Plane 12.

Microsoft Flight Simulator 2004 or as it's know, FS2004 was released in 2003 and was the next generation of PC flight sim packages after the release of FS2002.  Flight Simulator 2004 set the benchmark for PC flight simulators, and the environment engine was overhauled after the previous release.  Many aspects of the simulator were changed; from weather settings and generation to the new included auto-gen scenery features (computer generated trees and other objects).

The world environment was a serious upgrade from FS2002 and FS2004 shortly became the most popular flight simulator of all time.  Even after the release of FSX, many avid flight simmers and users still think of FS2004 as the "ultimate" simulator and prefer it over later versions, claiming that the package is more stable and tried and tested.

By popular user demand, we have launched our P3Dv4/P3Dv5 page which only displays add-ons and mods that are compatible with these versions.

Listed in this category are a selection of flight simulator packages and games that are free-to-download. Most of them...

All the files from Flight Sim 2002 now in one category.

Other downloads including movies, demos and presentations, benchmark software and more.

There are 24166 Downloads and 66 Categories in our database