A repaint of Guy Hulin's Chance Vought F-4U1A Corsair (CORSF4U7.ZIP), updated for Flight Simulator X. This aircraft has blank texture files (Navy blue base color). This is a good starting point for any F-4 Corsair project with easy to follow instructions and easy to use bmp files. Lets everyone c...

A repaint of Guy Hulin's Chance Vought F-4U1A Corsair (CORSF4U7.ZIP), updated for Flight Simulator X. This aircraft has blank texture files (Navy blue base color). This is a good starting point for any F-4 Corsair project with easy to follow instructions and easy to use bmp files. Lets everyone create there own favorite Corsair. Package instructions and aviation art and links to aviation nose art also. The .cfg file has been corrected with Sweet Dee on line now; re-download Sweet Dee F4U1A Corsair for fix. Textures by Mark Rooks of RSDG Aircraft. 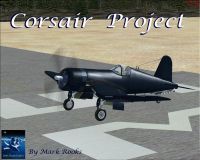 Screenshot of Corsair on the ground.

2.Copy the " F4U1A Corsair Project " folder and paste it in the main aircraft folder.

Aircraft created with easy to use bit map textures.

8. After painting File must be saved and Converted paint shop will save to Windows OS2 BMP Convert Windows OS2 BMP to FS70 DXT1BMP using or Window NT 16 Bit Bitmap 565 For more detail MW Graphics convim BMP tool I use FS70 DXT1BMP There are many others you can use like DDS Tools.

Textures and FSX updates created by Mark "Fire Ball" Rooks.
Load the Guages and the panel. 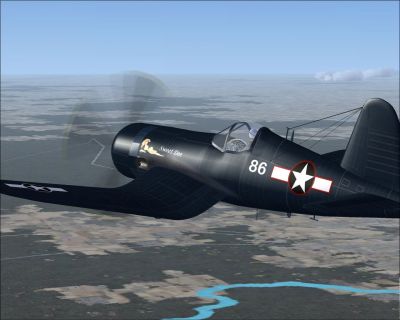 Screenshot of Corsair in flight.

The archive corblk.zip has 31 files and directories contained within it.