Dan Air Viscount 708 (Alidair livery). Twice leased to Dan Air during the period July 1977 to January 1979, G-ARGR is shown as it appeared in August 1978 flying with Dan Air titles on an otherwise complete Alidair livery. Requires the FSDS Viscount 700 model by Rick Piper. By Garry Russell. 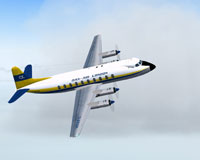 The archive v708daal.zip has 23 files and directories contained within it.