Douglas DC2-112 (c/n 1237), in service with TWA and registered 'NC13711' was the first DC-2 ever built. The first flight took place on 11 May 1934 and three days later the plane was delivered to TWA. On 11 May 1934 - only one week after its first flight - it entered commercial service with TWA on the Columbus-Pittsburgh-Newark route. This is a repaint for the Douglas DC-2 package by the Uiver Team X. The revenue from the sales of the DC-2 package will be donated to the Aviodrome, Dutch National Aviation Theme Park and Museum. By Tim Scharnhop. 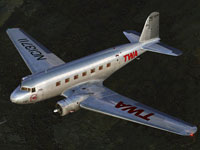 Save the file. You're done. Your new aircraft will now appear in the aircraft selection menu within the sim.

The archive dc2x_twa2.zip has 19 files and directories contained within it.