Convair R3Y-1 "Tradewind". The R3Y was a flying boat with four turboprop engines driving counter-rotating props. It first flew in 1954 and set several speed and endurance records. Problems with the engines led to the end of the program with only eleven being built. This is a native FSX Accelerati...

Convair R3Y-1 "Tradewind". The R3Y was a flying boat with four turboprop engines driving counter-rotating props. It first flew in 1954 and set several speed and endurance records. Problems with the engines led to the end of the program with only eleven being built. This is a native FSX Acceleration project. It has the usual animations plus a beaching gear. It has DXT5.DDS textures with a muted specular shine. The VC is based on photos and has a complete set of engine gauges at the flight engineer's station. The gauges all feature back-lighting. By Paul Clawson.

The R3Y was powered by 4 turboprop engines driving counter-rotating propellers. It flew first in 1954. It was originally designed as a patrol bomber and was designated XP5Y. Later, the Navy decided it should be used to haul personnel and cargo and was designated R3Y-1. The first few had a pointed nose that was the style of the Patrol Bomber. Later models had a rather bulbulous nose which opened, making it easier to load and unload. I did not like the looks of the bulb nose at all so I modeled the earlier pointed nose version. It had great performance for the day; it set several speed and endurance records. Unfortunately, the T-40 engines proved to be very unreliable so only 11 planes were produced.

This is a native FSX Acceleration project. It has the usual animations plus a Beaching Gear. The textures are DXT5.DDS and have a muted specular shine. This model is painted for the Naval Air Transport Squadron VR-2. The VC is based on photo's. Most of the flight gauges are default. The flight engineer's panel is visible from a camera location. Most of the engine gauges were put together by myself from default XML statements and bitmaps modified as necessary. The rest were modified from freeware gauges from PAD. Many Thanks to Bob May of PAD for giving me permission to use them. All the gauges have back lights for night ops.

The rather large beaching gear is actuated with the G key like a landing gear. It retracts up and disappears. It reappears on the way down. The gear has benign lift and drag so it does not interfere with the flight dynamics of the aircraft. One caveat re the gear; when you approach a ramp and actuate the gear, the whole plane and gear jump up and then settle down as the gear hits the ramp. This effect seems to be a glich in FSX. The bigger the plane the more it jumps. My Martin Mars (Alphasim) bounces even higher. It is only slightly obvious in small planes like the Goose.

I have included a simple XML gauge that turns engine smoke on and off at about 80% throttle. It uses the default F-18 smoke effect. I have never seen a large turboprop going overhead that did not leave a smoke trail of some kind.

The sound file is from a early C-130 whose origins I have forgotten.

The archive r3y.zip has 98 files and directories contained within it. 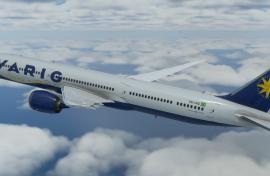 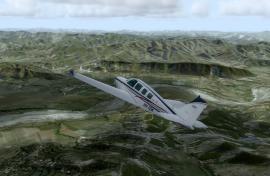