This complete aircraft is a repaint and re-working, for FSX, of Ted Cook's Vickers Viking (originally made for FS2004), and represents an aircraft of the Royal Dutch East Indies Air Force, used for reconnaissance and patrol work in the South Pacific. By Brain Farrington and Leyland Spurr.

This complete aircraft is a repaint and re-working, for FSX, of Ted Cook's Vickers Viking (originally made for FS2004), and represents an aircraft of the Royal Dutch East Indies Air Force, used for reconnaissance and patrol work in the South Pacific. By Brain Farrington and Leyland Spurr.

Installation:
Everything you need is within the aircraft folder which you have just unzipped. Place the folder within your FSX "airplanes" folder, typically found at C:\Program files\Microsoft Games\Microsoft Flight Simulator X\ SimObjects\Airplanes. In the aircraft selection menu, look for it under "Vickers".

Note, only for users of maximum "hard" realism settings: We have been unable to eliminate crashes in this mode other than by placing the "crash tolerance" slider no higher than a half-way position. All other sliders can be at maximum (sorry about that, any suggestions would be welcome).

The Viking amphibian was first developed in 1918/19 and the basic design progressed through a series of marques and variations (there were enclosed cabins as an alternative to open cockpits for instance) culminating in a final pair, different enough to be renamed "Vulture" and "Vanellus", in 1925.

Two famous pilots lost their lives in Vikings, Sir John Alcock (of transatlantic Vickers Vimy flight fame) was Vickers Chief Test Pilot and was killed in a forced landing in thick fog while flying the Viking I G-EAOV to the Paris Aero Show in 1919. The other was Sir Ross Smith, who famously flew another Vimy, with his brother Keith, from Britain to Australia in 1919. He was killed in 1922 while testing a specially constructed Viking IV G-EBBZ (the subject of Ted Cook's original FS9 model) which was intended for a round-the-world attempt. The aircraft stalled and spun into Brooklands' Byfleet banking, shortly after take-off.

A healthy order book for Viking IVs kept Vickers busy during 1922/23 including examples exported to Argentina, France, Japan and USA, along with an order for ten from Koninklijk Nederlands Indisch Leger which had a requirement for a reconnaissance amphibian for patrols over water and over islands with few landing strips.

Koninklijk Nederlands Indisch Leger (KNIL) was The Royal Dutch East Indies Army, whose Air Force was origially the Aviation Department - Luchtvaartafdeeling, LA of the KNIL in 1922. This Department became, due to some organizational changes, more independent from the Army and was named Militaire Luchtvaart KNIL or ML-KNIL after 1935.

The KNIL aircraft depicted in this model is a speculative representation, due to a lack of information on squadron markings and colour schemes. Available information for Dutch aircraft in the far east is almost entirely of WW2 vintage and the only certainty is that markings were changed at the beginning of that conflict, with camouflage coming into use and the national markings changing to an orange triangle to avoid visual comfusion with the enemy's insignia. We have therefore resorted to 'best guess' tactics and would welcome any verifiable information on appearance during the 1920s and early 30s, regardless of whether it supports or contradicts our efforts.

Flying over the South Pacific islands during the course of testing this model has been an upexpected pleasure, it's not an area we would have thought of flying over without having a reason and the scenery and terrain is very beautiful ("Bali-hi, she will call you", and all that). For that reason a list of likely locations, using standard FSX airfields, is appended as a guide to the kind of flights these machines might have been expected to make.

Here are some locations you might care to explore in the Dutch East Indies. A couple of small maps are enclosed to give an impression of the area and scope of operations. We don't think the metroplitan areas like Jakarta and Surabaya are appropriate in appearance for a vintage aeroplane. All of the following locations are near major shipping lanes (which is where I imagine most patrol activity would have been) and most of them have adjacent access to water for a wheels-up landing. The majority of the airfields mentioned are small enough to look reasonably appropriate.

The Makassar Strait lies between the Celebes and Borneo, there is an nice small field at Palu (Mutiara) WAML in Celebes. To the west (Borneo) there's a choice of three small ones close together (relatively) - Tanjung Santan WALT , Samarinda (Temindung) WALS or Muara Badak Pujangan WALQ which is smallest and nearest the coast, with the larger Sepinggan (Balikpapan) WALL further south. These would all make suitable destinations from Palu although it's a fairly long flight.

Then there's Bali WADD which is appropriate except the modern airport may be a bit too big. Next Island East (Lombok) has Selaparang (Mataran) WADA which is suitable, and there's a volcano (Mount Rinjani, supposedly still active) on this island with a crater if you care to climb up to it - peak altitude is 3,700m / 12,200 ft, but 8,000 ft. will suffice to see the crater - the view is terrific, more so for being unexpected! to get the full effect, after take-off from WADA, turn north and make a curving climb to starboard over the sea until you are northeast of the summit then fly towards the crater.

Further East to the next island Sumbawa, the field (at Sumbawa Besar) WADS is OK and further across the island is a perfect natural harbour and strip at Bima (Mohammad Salahuddin) WADB.

Across the Sunda Strait from Java,there's an FSX airfield at Radin (Bandar Lampung) WICT. It would be a reasonable flight east from there to the Jakarta area where there are several small fields available (I should call it Batavia, the Dutch did!).

If you want to explore the Surabaya area try Abdulrachman Saleh Aero (Malang) WARA which is inland (south) of Surabaya but did feature (as Singosari airfield) for KNIL.

Ted Cook (of course!) for his efforts in producing this and a whole hangar-full of other vintage British aircraft (thanks Ted!).
Steve Buchanan (aka Lawdog2360) for his excellent Hispano Suiza sound package - his original readme is enclosed (see "HS readme.txt" in the sound.HS folder).
Roger Law for his efforts in improving the bitmap for prop and glass textures. 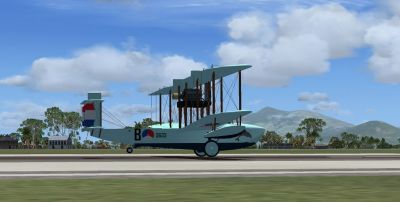 Screenshot of KNIL Vickers Viking on the ground.

The archive vikingx.zip has 71 files and directories contained within it.