Improvements over FS2002 include 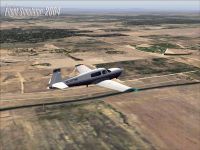 In 2004 Microsoft released a service update that corrected 160 bridges that were either missing or were rendering incorrectly. Other improvements and updates were included.

The antique aircraft in FS2004 are tough-to-fly. The Wright Flyer, complete with gauges strapped to the frame, is included. You can also try out the “Spirit of St. Louis” which Charles Lindbergh flew across the Atlantic to France in his historic flight. It has a unique design: to make the plane as streamlined as possible they removed the front windows. The only way to see forward was through a periscope or to stick your head out the side window. 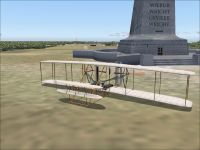 Screenshot of the Wright Flyer next to the Wright Memorial at Kitty Hawk in Microsoft Flight Simulator 2004.

You can also fly a Lockheed Vega, used by Amelia Earhart flying across the Atlantic, the Sopwith Camel civilian flight simulator, or try transporting goods with a long-haul DC-3. Not only can you fly vintage airplanes, you can fly the historic routes of the famous flights taken by the Wright Brothers, Lindbergh, Earhart and more. They are relatively difficult to learn for beginners. Experienced flyers will have a faster learning curve.

Any flight simulator is a challenge to fly with just a keyboard. The older aircraft are even more difficult to fly due to their design. For example, the Curtiss Jenny is a tail-dragger that takes a certain amount of finesse to bring down properly. For that reason, most experienced users will recommend the use of a joystick at a minimum. A yoke with rudder controls is even better. Many of the older planes are hard to maneuver in turns without some serious rudder wrenching.

There are two helicopters in the line-up. The new entry is a Robinson R22 Beta, which joins the well-known Bell JetRanger. The Beta is more of a hyperactive little puddle jumper compared to the larger, smoother JetRanger, another good reason to have rudder controls at the ready.

The feel and touch of FS 2004 has not changed much from Flight Simulator 2002. Most of the commands are the same. That is actually an advantage when flying the vintage aircraft. They are slower and don’t respond quickly like newer, modern planes. As a result, they fit in well with the FS2004 modeling algorithms, steady and reliable but not overly spectacular.

Experienced players recommend playing with at least a joystick and preferably a yoke with rudder pedals. Yokes can be purchased for $100USD and up. A yoke with throttle runs around $130USD and up. Joysticks are more reasonable at around $30USD.

FS2004 can be difficult for first time players. Microsoft has taken steps to help beginners with a series of videos from certified flight instructors. There are also multiple tutorials and the ability to adjust the difficulty levels. Users should expect that the menus can be intricate and take some time to learn.

The program itself comes on 4 disks. Disk 4 is needed to play the program. For example, you can’t take it to a friend’s house and play it there if it is on your machine at home. You need to install all 4 disks and the 4th disk must be in the machine at all times during play.

Many users cite the improvements in weather handling as the best game improvement from FS2002. Users can choose weather “themes” that will unfold a series of preset weather conditions as the flight progresses.

FS2004 can also draw upon real time weather conditions pulled from the web. Users can choose local weather to mimic conditions happening outside their window. Thunderstorms, snowstorms, fog, rain, sleet, sunshine, cold fronts and more are available at the click of your mouse.

You can also tell the system to use the real time weather of whatever airport you are flying into or departing from. Improved graphics detail realistic precipitation, cloud formations and storm fronts.

A comprehensive learning center offers flight training including the complete theory of flying. This is a good place to practice if you want to be a pilot. In fact, many flight schools recommend their students use it on a regular business.

You can get extensive pilot training. The system takes you from Student to Soloing, to Private Pilot training to Commercial Pilot. You get full instrument experience from FAA Certified Flight Instructors.

The training is also productive for current pilots wanting to stay sharp behind the controls. You can practice flying at night. Or you can practice holding patterns, approaches, bad weather flight, instrument flying, ending failures, missed approaches, etc.

The learning center is supported by extensive documentation including a Key Topics guide, links to flight lessons, how-to’s, handbooks, briefings, etc.  Enthusiastic players may want to get copies of both FAA publications Airplane Flying Handbook (FAA-H-8083-3A) and Pilots Handbook of Aeronautical Knowledge (FAA-H-8083-25A) to help increase flying expertise and provide a deeper background in aeronautical intelligence.

Here are the system requirements on the box:

FS2004 has been found to be very versatile, working well on many machines, even those with low memory or slower video cards.  While terrain and water imagery is much improved, buildings and other structures still retain a primitive look similar to FS2002. The advantage is that players using all types of machines can run the program. Many people still stick with FS2004 - some prefer it over FSX.

One of the real strengths of FS2004 is the way the flight simulator community has embraced the program and developed thousands of freeware (and payware) add-ons.

FS2004 can be operated at a higher frame rate than many newer flight simulators so graphics can be rendered more accurately. It is easier on many computer systems, allowing more users to enjoy it and subsequently develop add-ons for it. 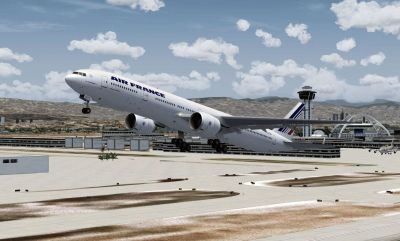 Image shows an Air France Boeing 777 being flown in Microsoft Flight Simulator 2004.  This is an add-on, not one of the default aircraft.  You can get a great Boeing 777 download for FS2004 here.

The community has developed many extras including scenery, cockpit panels, ATC exchanges and landscapes. You can also find additional aircraft, cars and boats. This is especially attractive for FS2004 as it did not ship with as wide a variety of aircraft as FSX.

With user add-ons you’ll get fighter jets and other aircraft types not seen in the original package.

Most add-ons come with simple instructions to install them. All you need to do is download and go.

There are also quality payware options--companies like PMDG offer additional aircraft and other programs like a 3-part Ground Training Course.

You can view our download sections for FS2004 here.

FS2004 enjoys good ratings from around the web. Dissatisfied players indicate that it does not seem much different from FS2002. For the majority, however, the improvements are enough to add much more functionality and fun to the experience. Other dissenters are impatient with Microsoft’s security measures and the need to keep Disk 4 in the computer during game play.

However, dissenters are in the minority. It is not uncommon for Microsoft Flight Simulator fans to skip the newer FSX edition completely and go right to FS2004. While the graphics are not as impressive, for many computer systems FS2004 is more stable, reliable and functional.

Flight Simulator is arguably the most popular program in the history of flight simulators. It appeals to many different types of users: pilots trying to keep your skills sharp, students training to become pilots, and casual users who just love flying over the Alps in a DC-3 or trying to land a Boeing 747 in a snowstorm in New York City.

While other programs have surpassed it in graphics, imagery and computing power FS2004 remains a favorite among thousands to this day.