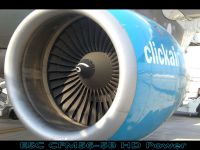 Engine Sound Creations (ESC) has released a sound pack for the CFM56-5B engines for FS2004 and FSX. These engines are used in many Airbus A320 aircraft.

This Airbus CFM56-5B HD sound pack is highly accurate and realistic – it was recorded from several airlines that use the actual CFM56-5B engines.

ESC is well known for their high quality sound packages. Their recent releases include:

The main good points about this sound package are: