During the late 1970s and early 1980s, Alaska Airlines flew this plane on charter flights for the Seattle NFL Team Seahawks. The Boeing 727s were the company signature aircraft for 25 years. This model was made specially for FS2004. Original model by Mike Stone, repaint by Alejandro Hurtado. 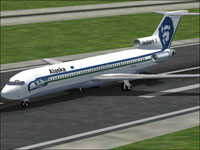 Screenshot of Alaska's Boeing 727 on runway.

One of my favorite planes is the 727. My second repaint was a 727, and after that I made another five. The first where based in the Kevin Trinkle model, very good for FS2002 but with problems in FS2004. So I selected the FS2004 model of Mike Stone, and started to upgrade all my repaints from FS2002 to FS2004.

Alaska Airlines is, of course, an airline based in Alaska, USA. It surged in 1944 after many merges of regional airlines. It became the largest charter operator in the world. Using surplus military aircraft, it flew everywhere, carrying food in the Berlin Airlift and refugees to the settlement of Israel. It bought 727 in the mid-60's, and were the company signature aircraft for 25 years.

During the late 1970s and early 1980's, Alaska flew the N297AS on charter flights for the Seattle NFL Team Seahawks, with a specially designed paint.

Just unzip b727ah22.zip in your "Aircraft" folder of FS2004 or FS9, install your desired panel and that's all. If you don't know how to install a panel, just let the one who comes installed, but I don't like it.

The archive b727ah22.zip has 55 files and directories contained within it.