"Santa Maria". Iberia, the Spanish national line, used seven Super Constellations from 1954 to 1966, covering the transatlantic routes. The Super Connies were one of the most famous planes of all commercial history, being even faster than some fighters of their era. The EC-AMP was so famous that it can be found in a postal stamp series. This repaint has three liveries, from 1959 to 1962. Panel included. Original model by Mike Stone, repaint by Alejandro Hurtado. 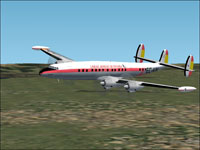 The 'Constellation' and 'Super Constellation' were among the last of the great prop-driven airliners just before the jet age began in civil aviation. In 1939 Lockheed began with the development of the L-49 as a large four-engined civil aircraft. When the USA entered WWII, the concept was changed to the military transporter C-69, which first flew in January 1943. After the war the design was converted back to its original role, and the first L049 Constellations were put into service with Pan American Airways in 1946. The characteristic long slender fuselage and the triple tailfin of the Constellation could soon be seen at all major airports of the world. The long range and the pressurized cabin made the Constellation superior to most of her rivals.

In 1951 the improved version, the L-1049 Super Constellation, saw service with Eastern Airlines. The L-1049, which had a longer fuselage and more power, went through many different versions, the last of which were the L-1049G and the passenger/freight version L-1049H. More than 600 Super Constellations were built.
The last of the Constellation series was the L-1649A Starliner in 1957. In spite of excellent performance, only 43 Starliners entered service.
At last, the age of the jetliners had begun.

IBERIA, the Spanish national airline, since August,1954 start to flew its scheduled service Madrid-New York, as well as other transatlantic routes with Lockheed L1049G Super Constellation. Seven of them joined Iberia, being retired of service in March, 1966.

The archive 1049ah26.zip has 95 files and directories contained within it.