HK-1708 "Ciudad de Neiva" is depicted in a modified Aeropesca livery. On 31 March 1991 this aircraft was structurally damaged when it was overstressed in flight. It made a safe landing but was wfu and stored. Requires the FSDS Viscount 700 model by Rick Piper. This replaces the earlier issue that was published with an error in the titles. By Garry Russell. 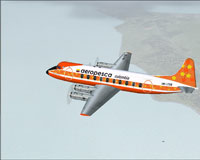 The archive hk170822.zip has 24 files and directories contained within it.