AI Boat Traffic Compiler (AIBTC) is a software to create, edit and compile schedules for ships in Flight Simulator X. It is inspired by the venerable TTools of Lee Swordy to create AI aircrafts schedules. Prior knowledge of aircraft AI traffic is needed to understand this document.

Note: If you don't want to compile yourself - have you seen the add-on we have for over 800 ships, boats and global traffic here?

How do boats work in FSX? (technical)

There are multiple ways to get sea traffic in FSX:

Globally, all the facts needed to create and understand boat traffic are the same as for aircrafts. However slight differences should be noted: 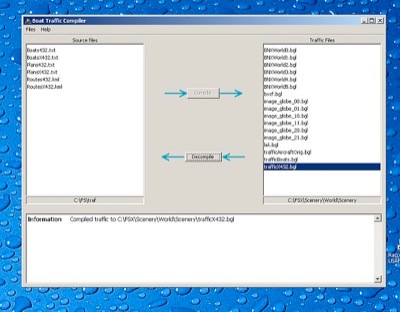 The archive aibtc02.zip has 15 files and directories contained within it.