Douglas C-124 Globemaster II. The C124 Globemaster II was the standard USAF stategic transport during the 1950s and 60s, until it was replaced with the Lockheed C-141 Starlifter. The C-124A and C-124C are both included in this package. By Jens B. Kristensen.

The C-124 Globemaster II was the standard USAF stategic transport during the 1950s and 60s, until it was replaced with the Lockheed C-141 Starlifter. The C-124A and C-124C are both included in this package.

For more information, see the pdf document installed in the \Documetation folder.

The sounds included here are, with permission from Tom Gibson, borrowed from the Boeing 377 Stratocruiser model. They were originally released for FS98 by H. P. Christeler, but have apparently been modified since, and I have used FS Sound Studio to update the sound.cfg to FS2004 / FSX format. Please read H. P. Christelers original readme file for this soundset, ReadMe_original.txt.

The gauges are to some extent based on default gauges of Flight Simulator, some of them modified by me for four engines. Other gauges are by myself. The ILS indicator is based on xml code by Saviero Maurri (Vickers Varsity panel), bitmaps by me. A number of gauges (mostly switches) are, with permission from Tom Gibson, www.calclassic.com, based on work by Tom himself, Kevin Trinkle, Ernie Kennedy and Ken 'Mitch' Mitchell. I have used complete gauges from them (cowl flap switches), or used the bitmaps from their c-style gauges and made xml-versions of them. Finally, a big 'thank you' to Hans-Joerg Naegele, who gave me permission to use gauges from his Lockheed 049 Constellation panel (VNConnie049.cab), directly or modified. 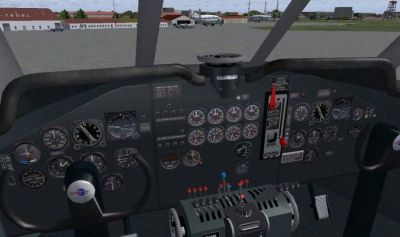 The archive c124_v10x.zip has 12 files and directories contained within it.

This is a well-done model. Great skin, and 2D and 3D panels. Well done!

My C-124 Globemaster installed fine but plane is not painted ie solid grey ,how do i correct this.?

My C-124 globemaster installed fine but when I start engines they run foe a few seconds and shut down, do I need to make some changes to fsx. Thank you, Van