Iowa Class Battleship. This is an update for the first release of the Iowa class battleships (IOWACLASSBATTLESHIP.ZIP). Includes reworked camera views and a few new effects. By Gart Shetter. 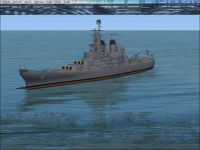 The Iowa class battleships are a class of six fast battleships of the United States Navy ordered in 1939 and 1940 to escort the Fast Carrier Task Forces, which operated in the Pacific Theater of
World War II. Four were completed in the early- to mid-1940s; two more were laid down, but They were canceled prior to completion and eventually scrapped. The last U.S. battleships to be Built, all four were either on display as museum ships or anchored as of May 2010.Iowa-class battleships served in every major U.S. war from World War II to the Gulf War in 1991. In World War II, they defended aircraft carriers and shelled Japanese positions before being placed in reserve at the end of the war. Recalled for action during the Korean War, the battleships provided artillery support for UN forces against North Korea. In 1968, New Jersey was recalled for action in the Vietnam War and shelled communist targets near the Vietnamese Demilitarized Zone. All four were reactivated and armed with missiles during the 1980s as part of the 600-ship Navy. In 1991, Missouri and Wisconsin fired missiles and 16-inch (406 mm) guns at Iraqi targets during the Gulf War. All four battleships were decommissioned in the early 1990s as the Cold War ended, and they were initially removed from the Naval Vessel Register; however, at the insistence of the United States Congress, two were reinstated to the Naval Vessel Register for maintenance in the mothball fleet of 1995. These last two battleships were removed from the Naval Vessel Register in 2006.

Iowa was ordered 1 July 1939, laid down 27 June 1940, launched 27 August 1942, and commissioned 22 February 1943. She conducted a shakedown cruise in Chesapeake Bay before sailing to Naval Station Argentina, Newfoundland, to be ready in case the German battleship Tirpitz entered the Atlantic. Transferred to the Pacific Fleet in 1944, Iowa made her combat debut in February and participated in the campaign for the Marshall Islands. The ship later escorted U.S. aircraft carriers conducting air raids in the Marianas campaign, and then was present at the Battle of Leyte Gulf. During the Korean War, Iowa bombarded enemy targets at Songjin, Hungnam, and Kojo, North Korea. Iowa returned to the U.S. for operational and training exercises before being decommissioned. Reactivated in the early 1980s, Iowa operated in the Atlantic Fleet, cruising in North American and European waters for most of the decade and participating in joint military exercises with European ships. On 19 April 1989, 47 sailors were killed following an explosion in her No. 2 turret. In 1990, Iowa was decommissioned for the last time and placed in the mothball fleet. She was stricken from the Naval Vessel Register on 17 March 2006. Iowa is currently anchored as part of the National Defense Reserve Fleet in Suisun Bay and is available for donation as a museum and memorial.

New Jersey was ordered 1 July 1939, laid down 16 September 1940, launched 7 December 1942, and commissioned 23 May 1943. New Jersey completed fitting out and trained her initial crew in the Western Atlantic and Caribbean before transferring to the Pacific Theatre in advance of the planned assault on the Marshall Islands, where she screened the U.S. fleet of aircraft carriers from enemy air raids. At the Battle of Leyte Gulf, the ship protected carriers with her anti-aircraft guns. New Jersey then bombarded Iwo Jima and Okinawa. During the Korean War, the ship pounded targets at Wonsan, Yangyang, and Kansong. Following the ceasefire, New Jersey conducted training and operation cruises until she was decommissioned. Recalled to duty in 1968, New Jersey reported to the gunline off the Vietnamese coast, delivering nearly 6,000 rounds of 16-inch (406 mm) gunfire and over 14,000 rounds of 5-inch (127 mm) shells before departing the line in December 1968.[dubious – discuss] She was decommissioned the following year. Reactivated in 1982 under the 600-ship Navy program, New Jersey was sent to Lebanon to protect U.S. interests and U.S. Marines, firing her main guns at Druze and Syrian positions in the Bekaa Valley east of Beirut. Decommissioned for the last time 8 February 1991, New Jersey was briefly retained on the Naval Vessel Register before being donated to the Home Port Alliance of Camden, New Jersey for use as a museum ship.

Missouri was ordered 12 June 1940, laid down 6 January 1941, launched 29 January 1944, and commissioned 11 June 1944. Missouri conducted her trials off New York with shakedown and battle practice in Chesapeake Bay before transferring to the Pacific Fleet, where she screened U.S. aircraft carriers involved in offensive operations against the Japanese before reporting to Okinawa to shell the island in advance of the planned landings. Following the bombardment of Okinawa, Missouri turned her attention to Honshu and Hokkaido, shelling the islands and screening U.S. carriers involved in combat operations against Japanese positions. She garnered international attention in September 1945 when representatives of the Empire of Japan boarded the battleship to sign the documents of unconditional surrender to the Allied powers. After World War II, Missouri turned her attention to conducting training and operational cruises before being dispatched to Korea at the outbreak of the Korean War. Missouri served two tours of duty in Korea before being decommissioned in 1956. Reactivated 1984 as part of the 600-ship Navy plan, Missouri was sent on operational cruises until being assigned to Operation Earnest Will in 1988. In 1991, Missouri participated in Operation Desert Storm, firing 28 Tomahawk Missiles and 759 sixteen-inch (406 mm) shells at Iraqi targets along the coast. Decommissioned for the last time in 1992, Missouri was donated to the USS Missouri Memorial Association of Pearl Harbor, Hawaii, for use as a museum ship in 1998.

Wisconsin was ordered 12 June 1940, laid down 25 January 1942, launched 7 December 1943, and commissioned 16 April 1944. After trials and initial training in Chesapeake Bay, she transferred to the Pacific Fleet in 1944 and was assigned to protect the U.S. fleet of aircraft carriers involved in operations in the Philippines until summoned to Iwo Jima to bombard the island in advance of the Marine landings. Afterward, she proceeded to Okinawa, bombarding the island in advance of the allied amphibious assault. In mid-1945 Wisconsin turned her attention to bombarding the Japanese home islands until the surrender of Japan in August. Reactivated in 1950 for the Korean War, Wisconsin served two tours of duty, assisting South Korean and UN forces by providing call fire support and shelling targets. In 1956, the bow of the uncompleted USS Kentucky was removed and grafted on Wisconsin, which had collided with the destroyer USS Eaton. Decommissioned in 1958, Wisconsin was placed in the reserve fleet at the Philadelphia Naval Yard until reactivated in 1986 as part of the 600-ship Navy plan. In 1991, Wisconsin participated in Operation Desert Storm, firing 24 Tomahawk Missiles at Iraqi targets, and expending 319 16-inch (406 mm) shells at Iraqi troop formations along the coast. Decommissioned for the last time 30 September 1991, Wisconsin was placed in the reserve fleet until struck from the Naval Vessel Register on 17 March 2006 so she could be transferred for use as a museum ship. Wisconsin is currently berthed at the Nauticus maritime museum in Norfolk, Virginia.

Kentucky and Illinois were never finished, and both were ultimately scrapped
Hull BB-65 was originally to be Montana; however changes in shipbuilding priority during World War II resulted in her being reordered as an Iowa-class battleship. Illinois was ordered 9 September 1940 and laid down 15 January 1945. Construction was canceled 11 August 1945 when Illinois was 22% complete. She was sold for scrap in September 1958.

Hull BB-66 was originally to be Ohio, the second Montana-class battleship however changes in shipbuilding priority during World War II resulted in her being reordered as an Iowa-class battleship. Kentucky was ordered 9 September 1940 and laid down on 6 December 1944. Construction was suspended 17 February 1947 when Kentucky was 72% complete. She was informally launched 20 January 1950 to clear a dry-dock for repairs to Missouri, which had run aground. In 1956, Kentucky's bow was removed and shipped in one piece across Hampton Roads, where it was grafted on the battleship Wisconsin, which had collided with the destroyer Eaton. Later, Kentucky's engines were salvaged and installed on the fast combat support ships Sacramento and Camden. Proposals were made to complete Kentucky as a guided missile battleship, but these plans were never realized. Ultimately, Kentucky was sold to Boston Metals Co. for scrap on 31 October 1958.

A special thanks to all the service men and women who fought for what we have now.

The archive iowaclass.zip has 116 files and directories contained within it.