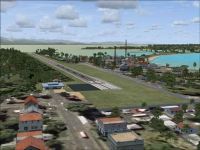 This is a GMAX scenery of Bocas del Toro International Airport, an airport in Panama. This is part of a larger project I have done some work on. At present two other parts of that project that have been released, namely MPTO (Tocumen Intl--AFCAD only), and MPDA (Enrique Malek Intl--gmax scenery).

Bocas del Toro is an interesting community of locals, ex-patriates of various countries (such as the USA, Canada, and Germany), and tourists. Two regional carriers fly into there from Panama City, using mostly Shorts 360, ATR, and occasionally Fokker 27 aircraft.

Please note that if you have already installed my MPDA David airport scenery, you will already have a seasons.bgl file controlling seasons in Panama. That same file is included in this package too--it prevents brown airport background textures in winter in Panama. Winter may be the dry season in Panama, but its never that brown at Bocas.

This scenery was tested with FSX Deluxe SP1, FSX Deluxe SP2/Acceleration, FEX, FSGenesis terrain, and ASG. I cannot guarantee compatibility with any other add-ons, such as UTX, which I do not have.

Autogen: at least NORMAL, preferably EXTREMELY DENSE (At a rural place like Bocas, even on mid-level computers like mine you can run Dense or Extremely Dense Autogen. The airport blends best this way.)

OTHER PANAMA PROJECTS AS OF MARCH 2088 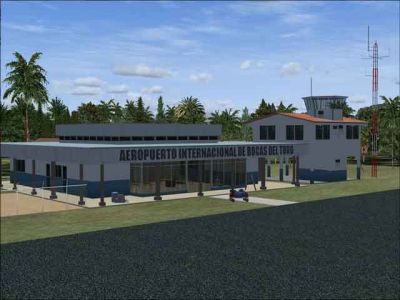 The archive mpborbv1.zip has 12 files and directories contained within it.