Scenery Al Jaber AB Kuwait. This is a "good as I could make it" reproduction of Al Jaber AB, Kuwait as remembered from 2001-2002 while the author was deployed there. Satellite images were used to do the AFCAD and basic building placement and recollections of the small details, especially the flig...

Scenery Al Jaber AB Kuwait. This is a "good as I could make it" reproduction of Al Jaber AB, Kuwait as remembered from 2001-2002 while the author was deployed there. Satellite images were used to do the AFCAD and basic building placement and recollections of the small details, especially the flight line area. Scenery objects downloads are required and a list is enclosed with the zip. By Ed Wells.

Unzip the enclosed, maintaining the file folder structure. Once unzipped, place the "Ahmed_Al_Jaber" folder in the Addon Scenery folder and activate in the Scenery Library. If you maintain a different Addon Scenery system, place the folder at your discretion.

Luke AFB
Note: all that is needed is the scenery objects. Install to a dummy folder and simply take the the folder labeled "MAIW Luke AFB (KLUF)" and move that as you would any other object library to your Addon Scenery folder and activate in the scenery Library.

Ok, that's everything you'll need as far as objects goes. What you do with them is up to you as some people have their scenery outside of the main FSX folder. For those who are old hand at this scenery thing, place the object libraries at your own discretion.

I have a folder named "Military Aircraft" and inside that is a scenery folder and a texture folder. I placed all the bgl files in the scenery folder and all the bmp's in the texture folder. Next, I loaded FSX and went to the "Scenery Library", "Add Area" and browsed to that folder, loaded it into the scenery library and clicked "ok". That's it, in a nutshell, for any object library that maintains that folder structure of a main folder and two inner folders for scenery and texture.

You can also simply take all the bgl's and dump those in the "Addon Scenery" scenery folder and dump all the bmps into the "Addon Scenery" texture folder. The advantage to that is that FSX will load everything automatically, the downside to that is that if you run into trouble with a particular object or bitmap, you won't know exactly which one because they're all bunched together.

Ahmed Al Jaber (OKAJ)
75 miles from the Iraqi border and south of Kuwait City. Al Jaber sits in the middle of a very large sand box. Vegetation is at a minimum and movement outside the base is restricted for obvious reasons. This scenery depicts the base as it was in 2001 and 2002 while I was deployed there. There is some scenery enhancement around the outlying areas and it does mimic somewhat the building layouts and locations, but don't expect it to be precise if looking at "Google Maps". Most of the scenery detail has been concentrated on and around the main flightline. Military buses and "Rosa" buses made almost hourly trips from the "housing" areas to the flightline and back, moving personnel, with lesser trips during the overnight hours as manning was at a minimum to support maintenance and munitions loading. Every bus made 3 checkpoints between the flightline and the tents or the chow hall area and you better have ID and Security clearance (line badges). The Security Forces in place did not hesitate to remove you from the bus and have a "chat" with you if you didn't have proper clearance, lol.

Daily "No Fly" missions were flown, highlited by "scrambles" about once every hour or so. The Iraqi's would attempt to hide their fighters by flying in tight to their outgoing Commercial flights thus reducing their radar signature. We simply scrambled our fighters to intercept and chase em' back home, lol.

I hope you enjoy flying into or out of Al Jaber or "The Jab" as some liked to call it. I came to enjoy the base despite it's location and kinda hated to leave when it was our turn to rotate, but it was nice to fly into Shannon, Ireland on our way home and have some brew at the Terminal "Pub".

The archive al_jaber_ab.zip has 9 files and directories contained within it. 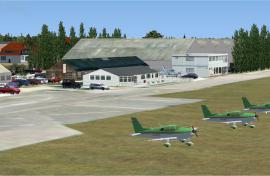