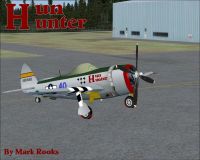 Screenshot of Republic P-47 Hun Hunter on the ground.

2.Copy the " P-47 Thunderbolt " folder and paste it in the main aircraft folder.

The Creations
(Airborne Version)And the Lord God spoke forth unto the heavens and said "Let there be Airborne". The earth did tremble and quake, and the waters did rise up. The clouds did part, and there came forth a multitude of parachutes which filled the sky. God looked down and saw that this was good. And they were good, for they were AIRBORNE!!

The archive p47hh.zip has 7 files and directories contained within it.