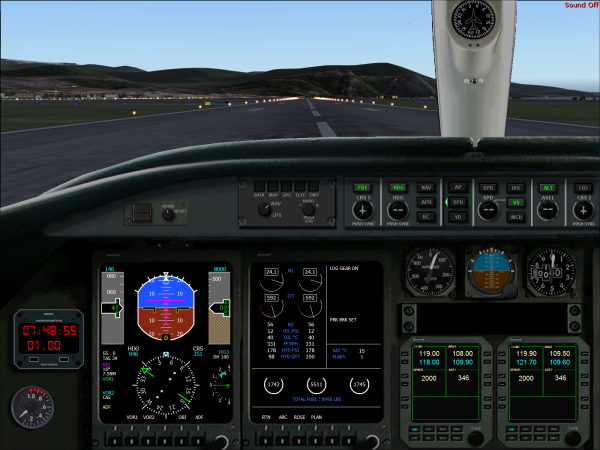 SimScape is proud to announce the release of the Cessna Citation Sovereign panel for the great freeware aircraft developed by Aryus Works. This panel uses the "Full Flight Gauges" technology developed by SimScape to provide high quality vector gauges for the modern glass cockpits.

This remake of the panel for FSX takes in all of the attributes that you would hope to see – it really does tick all of the boxes. The Sovereign itself is known as the business traveler that everyone with a bit of style wants to use; and this offers you chance to cover a bit more distance in a less time.

Additionally, it’s known to be extremely comfortable to use as an aircraft – and this comfort extends to the ease of which these panels are used. Everything is meticulously placed in accordance with the real thing, making management and usage incredibly simple.

This panel works in accordance with the Aryus Works model so you will be combining a quality design with an intricate and balanced cockpit that looks the part. The Citation Sovereign is an incredibly balanced and accurate aircraft, and you’ll find that performance will be very easy to balance thanks to the range of features included within. Everything that you need is simply located and this makes taking on those crucial decisions mid-flight so much easier than before. It becomes incredibly simple to manage the aircraft through this panel, giving you a closer scope of realism than the original model could provide.

The panels themselves are created using hours’ worth of reference and detail, ensuring that the readings and the formats provided are as accurate as possible. This makes flying the Cessna as easy as possible, removing a large part of the challenge in getting used to the cockpit. If you have flown the Sovereign before and found that the cockpit was a little bit less comfortable than it could have been, this takes away a lot of the logistical issues that would have persisted with previous panels; it really simplifies the entire flight process for you.

About The Cessna Citation Sovereign

Manned by two just two people and only capable of carrying twelve, it might seem surprising that the Cessna Citation is so highly thought of. However, it comes with an incredibly propensity to make flying an easy task, offering sublime comfort inside and ensuring that business types can get to their destinations without so much as a complaint. Despite its relatively small nature, though, the aircraft is the second heaviest in the Citation line and is only exceeded by the Citation X.

The aircraft itself is typically used for flights across smaller distances, but can be used for some longer flights; for example, LA to Hawaii.

It’s main usage, though, is most certainly as a corporate vessel and its services tend to be built around shuttling high-class business people to private locations quickly. It’s ability to land and take off over a short distance, due to its high aspect ratio wing, makes it a hugely welcome choice for those who are flying to smaller airports without the typical take-off room that they might be used to at a more international airport. The Sovereign itself has been around for more than a decade, and was awarded an EASA certification in June 2014.

Does this sound like the kind of plane that you wanna try out? Then why not soup it up with the new panels provided here by SimScape?

More panels will come soon, using the same technology, especially for Boeing and Airbus aircrafts. More information can be found on the SimScape site: