The Cessna Citation II was recently released by Carenado, and was part of the HD Series released by the group. As one of the most prominent names in the modding world for flight simulators, the S550 was much anticipated prior to release, with the bar set so high with the original release.

This release provides you with access to the fantastic Cessna S550 Citation II. This is an aircraft with a rich and unique history, and its colorful nature carries on through to this new download that you can install right away. Designed to give you quick and effective access to a revered aircraft that has never been given enough credit, having helped set the pace for development in the 1970s, and this package can be the perfect tonic for any Cessna fans out there.

The aircraft first rose to prominence when it was constructed in the 1970s amidst much media glare and attention; the aircraft looked to break previous barriers and become a whole new level of aircraft for the time. This light corporate jet was brought in to be the access for business bigwigs across the world, helping them shoot about without the slightest care in the world.

This aircraft was used for many years as the access point for the rich and the famous, and its profile rose due to this association. Designed to look as lavish as it actually performed, the aircraft was capable of providing the luxury that the best required whilst still being an economically viable part of the long-term plan for Cessna.

Simple to fly by corporate standards and built to give a real allure of class in comparison to various other units out there, the Cessna S550 Citation II more than held its own for more than three decades. Eventually, the aircraft left regular usage in 2006 when it was finally decommissioned after one of the longest service hauls of any aircraft of its type.

This release helps to bring the Cessna Citation II back to life in its truest form; rather than just being a nice addition to the selection you have or something to look out for when you’re bored, the Cessna S550 Citation II was a hugely respected aircraft that was capable of dicing through the skies with absolute ease. Not only is it extremely easy to maneuver and use, its dynamics are absolutely spot on; everything about the aircraft has been re-created to absolute perfection. If it’s a remake of an aircraft, re-forged in the finest HD textures and the smoothest cockpit experience that you are likely to come across, then you really do want to give the S500 a try!

A package designed to give the users authenticity over anything else, this is perfect for flight lovers as well as enthusiasts of the Cessna brand exclusively; it takes all of the key points about the aircraft and blends them in perfectly. This provides a whole new kind of corporate experience!

In this package, you’ll receive access to a wide variety of nice extras that help bring the remake together perfectly. Rather than a pale imitation, you’ll be getting all of the realistic little additions that you would expect to see included, making your education so much easier to properly follow;

These additions make it much easier to start preparing your aircraft skills for the real thing; the Cessna might be out of commission now but it set the precedent and the tone for many aircraft today. If you are used to modern corporate aircraft then you’ll really get to see the similarities emerge.

With this package, though, you can really take the fantasy to another level and give yourself a front seat view of what you will be getting upto later on; you’ll be able to experience the thrills of flying Citation properly with all of its key features included!

The textures for this package were created using high-end 4096X4096 resolutions, making sure that absolutely nothing has been left behind. If it’s authenticity that you seek in design then this package delivers it in abundance – the pixels are put together to make sure the entire image blends perfectly 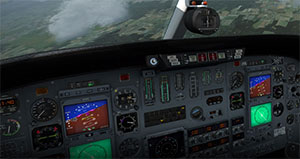 The image has been improved, but so has the sound; the new 3D stereo sounds have been added in to make sure it matches the quality of both performance and visuals perfectly. When it all comes together, it sounds truly authentic and helps to build the proper narrative

One of the most impressive changes, though, is the massive leap that the software takes in terms of the authenticity of the aircraft; this flies much closer to the real thing than many other releases of the same caliber and even the same model. By promoting reality, this feels just as it should

Completely customizable panels – including the light strength – to make sure that you have maximum control and visibility at all times. Find that the cockpit is a little bit dark? Then you might want to consider switching on the lights to make it a bit easier to see what you are actually doing in the first place!

The lights on the aircraft can be suitably modified to make sure that you can see both everything inside the cockpit, but every detail on the outside as well. The little things really matter and in the form of an aircraft as important as this, the small additions such as the light are one of the true catalysts for why this is such a celebrated aircraft – it really added that extra layer of luxury!

Flight dynamics have been tuned perfectly; this flies just as it would have in the real world when it was still capable of taking off into the skies. The official information that has been used to structure this aircraft makes it fly as true as possible, each strength made to shine and each weakness something to try and cover up and protect you from when moving forward.

Massive lists of small changes that help to make the whole thing come together – if you need each aircraft that you fly to represent the real thing with all of those small things coming together to create the perfect environment, then you need to try this package out right away!

GPU simulation features have been added; now, you’ll get access to key features such as a volts indicator to help you really get that sense of power and authority. If you need your simulation to be a bit more challenging than the basics you’ll find in some scenarios, this is for you.

You can pick up the download for the Cessna S550 Citation II HD Series from HERE – this will give you all the help that you need in getting the package downloaded and installed with the minimum of fuss. Ready to see what Cessna had to offer back in the day?