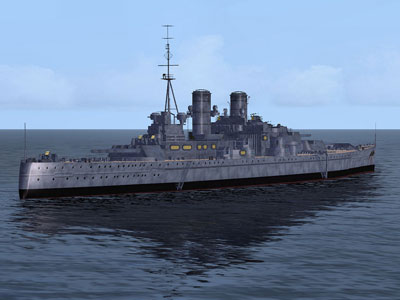 Battleship simmers, feast your eyes on this beauty! The HMS King George V Battleship was developed by Deltasim Studio. This simulator add-on is Microsoft Flight Simulator X compatible and is priced at just over 20 pounds. It has a file-size of 47 MB and can be downloaded immediately after purchasing it.

The HMS King George V was one of the best and brightest of all the boats in the British Fleet during the Second World War. Vickers-Armstrong built it at the well-known Walker’s Nava Yard. Commissioned in the year 1940, about one year later, it was involved in numerous battles. The ship and crew worked, alongside another battleship to sink the German Bismark battleship. By 1957, the HMS King George V Battleship, was removed from further duty.

The simulator for this battleship is a really good one. It comes with parts that move, for example, the switches, cannon turrets, fire consoles and doors, can all move. Simmers will find that this add-on has a few really cool effects. It is possible to hear gunshots, explosions and other sounds appropriate for battleships.

The model for this simulator is quite accurate and detailed. It comes with native DirectX textures, gauges, effects that are custom and a variety of really cool (not to mention realistic) sounds.

Individuals will be able to shoot both cannons and turrets. The turrets which measure 133 mm come with cartridges that hold 20 missiles. This is good for about 10 shots per session. In all, the simulator comes with more then 150 missiles. The larger turrets, 356 mm, came with 10 cannon-like missiles, some of them anti-aircraft and others, of type.

Purchase this stunning boat for FSX and view screenshots here.