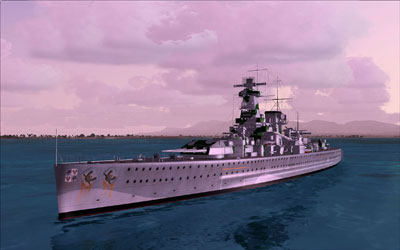 After closer inspection, individuals who enjoy battleship simulators may want to make the Admiral Graf Spee Battleship their next purchase. Priced at £21.90, this simulator add-on can be downloaded immediately after buying it. It has a file size of 90 MB and is compatible with the Microsoft Flight Simulator X.

For those of you who don’tknow, the Admiral Graf Spee is amongst the most noteworthy and well known, German naval ships. It was once a warship and engaged in active duty during the 2nd World War.

The boat was the size of a cruiser. However, it contained a large amount of fire power. Its’ sailors were both armed and prepared to do battle. An active warship, the Admiral Graf Spee sank nearly 10 ships in the Atlantic Ocean during its tour of duty.

A number of features on the boat can be controlled via the simulator. They are the boat’s speed, its search reflectors, the fire console, torpedoes and torpedo launchers.

Individuals looking for a quality warship simulator will find that the Admiral Graf Spee Battleship is a good choice. This one allows individuals to“control” one of the more well-known and celebrated warships in World War II. This warship, though no larger than a cruiser, was a force to be reckoned with. It was heavily armed and managed to down 9 Allied merchant boats.

You can purchase this stunning boat and view screenshots and videos here.