Screenshot of Beech 1900C on the ground.

Beech 1900C made flyable. Hire on as cargomaster for Alphonse Coletti and Sir Reginald Percival Herringbone Cutlief III, co-proprietors of Col-Cut Cartage, subcontracting to numerous airlines for lost luggage pick up and re-sale, unclaimed pet cold storage and rendering, and unclaimed freight auctioneering. Tired of carry on luggage fees? Simply pay Col-Cut a low yearly flat rate, and Alphonse and Sir Reggy will fly your carry on bag to your destination, following your airliner all the way. Disembark, catch a cab to the freight hangar, and pick up your bag. What could be easier? This is the Henry Tomkiewicz Beech 1900C, made flyable in FSX with default King Air 350 panel and sound (no VC).

2.) Nick Cooper, for a prop texture which displays quite nicely on FS2004 planes in FSX-SP2. (I'm pretty sure it's Nick's, but not positive, because I've got a billion prop textures, all re-named a billion times as I continue my search to find the best prop display for FS2004 planes flown in FSX-SP2... not an easy task)!

3.) The original authors of the "fx_smoke_f6" and "fx_enginesmoke" effect files, whoever you are.

I take no credit for any of this, all I did was figure out some smoke coordinates, compile it all into a flyable Beech, find a prop that fits the bill, and give Al and Sir Reggy's ride a fresh coat of paint.

1.) The King Air gauges are already installed in your FSX "Gauges" folder, so that's done.

2.) Copy and paste the two enclosed "fx" smoke effects files into your FSX "Effects" folder. (They are both probably there already).

3.) Copy and paste the entire "Beech 1900C (HTAI)" folder into your FSX "Airplanes" folder. The lighter thinner engine smoke is already installed. If that is ok with you, you are done. Go fly! She's in your menu under "Beechcraft". 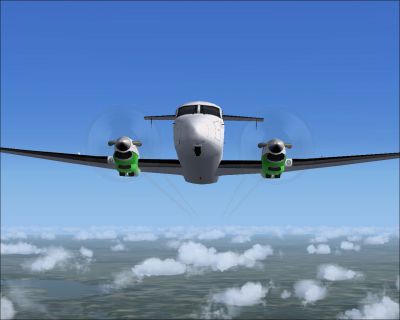 The archive fsx_beech_1900c.zip has 129 files and directories contained within it.