KLM was the first non-British airline to order the Vickers Viscount 800 series. They were delivered in 1957 and were named after aviation pioneers. KLM's nine Viscounts, which were the airline's first turboprop equipped aircraft, were mainly used on the European network. With the introduction ...

KLM was the first non-British airline to order the Vickers Viscount 800 series. They were delivered in 1957 and were named after aviation pioneers. KLM's nine Viscounts, which were the airline's first turboprop equipped aircraft, were mainly used on the European network. With the introduction of the short to medium haul jetliners in 1966 the days of the Viscount with KLM were numbered. The whole fleet was sold to the Irish Viscount operator Aer Lingus. This repaint represents Viscount PH-VID 'Otto Lilienthal' in the livery of the 1957-1960 period. These are textures only. You will require Jens B. Kristensens Vickers Viscount package (VISCOUNT_10X.ZIP). Repaint by Maarten Brouwer.

First, make sure that the base model is installed on your system.

Find the JBK Vickers Viscount 800 folder on your system, and place the folder texture.klm_1957x in there.

Then open the aircraft.cfg file and paste the following after the other, similar sections at the top of the file - replace the x with the next number in the sequence:

Thise repaint has been made for FSX only.
A similar repaint for the FS2004 version of Jens B. Kristensen's Vickers Viscount (viscount_10.zip) is also available (search for v803klm57.zip).

These textures are released as freeware which among other things means that you shouldn't pay for it as part of a collection or otherwise give anyone anything in order to enjoy it. 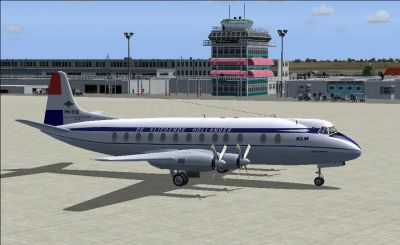 Screenshot of KLM Vickers Viscount 803 on the ground.

The archive v803klm57x.zip has 23 files and directories contained within it.