Long before they became a major user of the type British Air Ferries leased this Viscount 803 from Aer Lingus during 1971. Returned to the owner in October it never flew again and was later broken up still in BAF livery. Requires the FSDS Viscount 800 model by Rick Piper. By Garry Russell. 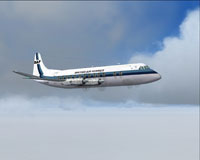 The archive baf1v803.zip has 18 files and directories contained within it.