This is a repaint for Tim Conrad's An32 of Aer Caribe Colombia Airlines (Cargo). This repaint was custom made almost two years ago by Lucian Lie and as owner of this custom made repaint, the uploader has decided to make it public as a tribute to the incredible talent of Lucian Lie who is now long out of making FSX repaints and to release this one of a kind repaint for the excellent An-32 model. By Bry Hardee/Lucian Lie.

Screenshot of Aer Caribe Antonov An-32 on the ground.

I have given this repaint to a small number of friends in the past but am now releasing it for various reasons. First and foremost this is too nice of a repaint to keep hidden away or keep only for myself. As far as I am aware, it is the only Aer Caribe repaint scheme for Tim's An-32.(or any other An-32 for other Flightsim platforms). Secondly but more importantly, I always liked Yago9's work. As far as myself and many other FS enthusiasts were concerned, he was one of the best repainters ever if not the best. Sadly he left the world of Flightsim some time ago and recent word is that his original files no longer exist except where previously uploaded. These files are a treasure in my humble opinion. I intend this release as a tribute to Lucian's excellent work and kindness to many for sharing his talent. Originally I stated to Lucian that I would not upload the file since it was custom made for me and he was already out of making FSX files for public upload but this agreement was all mine and he made no specific request of me outside my intentions. This quasi-agreement has since long passed. I assume full ownership of this file as it was custom made for me and credit goes to Yago9 for making it.

About the history of this repaint coming into being. I have traveled extensively to and inside of Colombia, South America. It is a very beautiful country and it actually has a rich Aviation history as well as unique airports/terrain. On one of my trips there, I was departing Bogota/El Dorado Airport aboard Delta Flight 444(B757) on November 2, 2009 when I spotted the real An-32 with this paint scheme on the taxiway as we were taxiing out to depart on Runway 13L. Less than a couple of months later when Tim Conrad released his FSX An-32, I pulled up photos on the net of this An-32 and soon after got Yago to make it an FSX reality.

Install:
Unzip and move the 'texture.Aer_Caribe' folder into your Simobjects/Airplanes/An-32 folder and then open the config file and copy and paste the following entry and save.

I assume no liability or risk for this file being installed improperly or user inflicted damage to other PC files due to unfamiliarity with MSFSX manual file installation procedures. 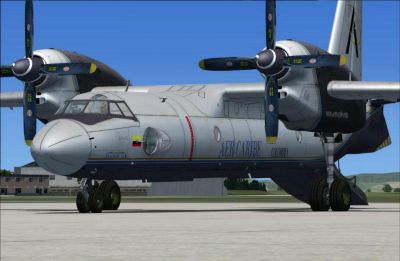 Screenshot of Aer Caribe Antonov An-32 on the ground.

The archive aer_caribe.zip has 27 files and directories contained within it.