Orbiter is a unique flight simulator that lets users launch manned or unmanned flights into space. They can dock with space stations, repair satellites, and land on planets. The vast reaches of our solar system are open for Orbiter fans to explore. The system lets users compress time to shorten l...

Orbiter is a unique flight simulator that lets users launch manned or unmanned flights into space. They can dock with space stations, repair satellites, and land on planets. The vast reaches of our solar system are open for Orbiter fans to explore. The system lets users compress time to shorten long adventures.

Space flight is accurately modeled; past missions can be recreated and new projects planned and launched. Pilots can spend hours launching payloads from Kennedy Space Center, visiting the International Space Center, or picking their way through the rocky rings of Saturn on a Delta-glider.

This is not a demo, it is a completely free (freeware) fully featured simulator. 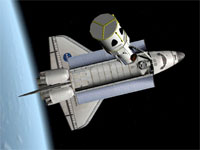 Shows the Nasa Space Shuttle in orbit over the Earth in the latest version of the Orbiter space flight simulator for Windows.

Orbiter was created in 2000 by developer Martin Schweiger. At the time, he wanted a simulator that accurately reflected physics-oriented flight modeling. The most recent version was released in August of 2010. Orbiter is freeware, not open-source. The core code cannot be altered. However, developers can create add-ons like new spacecraft using the Orbiter Software Development Kit. It provides code libraries, sample code, utilities and documentation needed to produce original designs. There is a special add-on forum at the Orbiter site to help programmers get started on the right foot.

An excellent teaching tool, Orbiter is used by many science, math, and technology classes to help illustrate diverse subjects from space flight to trigonometry. To get the most out of Orbiter, it helps to have some knowledge of orbital mechanics. Robert A. Braeunig’s Rocket and Space Technology website (http://www.braeunig.us/space/index.htm) is designed for space travel aficionados who desire to learn more than the basics but want to avoid complex concepts and theories.

Information for the Orbiter Wiki page:

The simulator was first released on 27 November 2000 and several new versions have been released, with the most recent version 100830 released for free download on 30 August 2010.

Orbiter has now been used as a teaching aid in classrooms, and a large community of add-on developers has created a multitude of add-ons to allow users to fly assorted real and fictional spacecraft and adding new planets or solar systems.

Orbiter incorporates planetary motion, space physics, and gravitation. Users will find it takes some experimentation to get used to how these dynamics affect space travel. Once mastered, navigation becomes smoother and easier.

Orbiter has both realistic and fictional spacecraft. Newer users find the fictional craft easier to pilot. They are also able to travel to distant parts of the solar system conventional vehicles cannot reach. The solar system consists of the sun, planets and large moons. The core product has no comets or asteroids. However, they can be included with an available add-on.

Using the keyboard or mouse, pilots interact with two Multi-function displays and one Head-Up Display. Developers can create custom controls, instruments, and virtual cockpits. Advanced players can incorporate TrackIR which allows Orbiter to follow their head movements and display the corresponding view.

Orbiter is Windows-only software, compatible with Windows 98/2000/XP/Vista/Win7 and Windows 10. The developers recommend a minimum of 4 GB RAM. Users will also need a DirectX compatible graphics card sporting at least 64MB of memory.

From its inception, Orbiter was developed to be a realistic simulator. Pilots are able to experience accurate planetary motion, free space travel, gravitation, and orbital decay. Advanced planetary system models are used to portray the positions of the Earth, Moon and planets in the solar system realistically.

Orbiter’s commitment to realism is reflected in the real spacecraft and space stations in the package. They include the Space Shuttle Atlantis, Space Station Mir, International Space Station, Hubble Space Telescope, and the Long Duration Exposure Facility Satellite. In addition to the real machines, Orbiter has fictional vessels including the Delta-glider space plane; Shuttle-A, a space freighter; Shuttle-PB, a small spacecraft; Dragonfly, a manned space tug; Luna-OB1, a space station inspired by the station featured in “2001: A Space Odyssey”; and Carina, a small payload satellite.

Developers have used Orbiter’s API to create extensive add-ons including spacecraft from the American Mercury and Apollo programs as well as the Soviet Vostok series. In addition to the spacecraft and stations previously listed, users have also developed new planetary bases and entire solar systems.

Some users love the multiple ways to add features missing from the core package. For example, there is no sound capability in Orbiter out of the box. Several enterprising developers created “OrbiterSound,” and add-on with engine sounds, cabin noise, radio signals, and even mp3 music.

Other users love Orbiter’s gorgeous graphics and immersive experience. One fan said Orbiter was “closest to the old inner kid dream ‘being an astronaut’ I'll ever be,” and provides a “sandbox the size of the solar system that let me free of doing whatever scenario I imagine.” (Orbiter-forum.com).

The archive orbiter-2016.zip has 12 files and directories contained within it.

Like any flight simulation fan, I’m a big fan of trying out something new, something interesting. So, it was to my rather animated surprise that someone had finally taken aviation to a whole new level within the simulation world with the release of Orbiter.

Rather than being able to get myself caught up in the madness of it all, though, I’ve been able to find the time to sit down and give Orbiter a real shot and see what I make of it.

For a start, let me just say that I’m someone who spent many hours playing old-school space-based flight games for years. So I’ve always wanted to be able to take off in a proper NASA style shuttle, do some landings on satellite and even land on different planets.

It’s this kind of amazing feature that I believe simulation has to tap into more; the vast majority (like all) of us will never set foot on another planet, so it would be nice to see it more accurately represented in flight simulation in general. So, I was delighted to finally come across this excellent simulator and give it a try myself.

For a product that was created more than a decade ago, it’s still got really impressive graphical capacity – compare it to games that came out at the same time and it seems to stack up far better. I’ll admit that at first the controls threw me and felt a bit restricted, but this purely from being used to games of modern eras that have afar more fluid and developed control scheme.

As a project with the budget and size it had, though, Orbiter absolutely shines through.

It makes a mockery of typical conventions that you need a huge budget to make something impressive, as it’s taken on aspects of flight simulation that none of the big hitters have been too willing to try and get involved in.

This is one of the best educational tools I’ve come across in terms of simulation, too. It’s got a lot going for it as it uses many different scientific classes to create something that you can actually learn from.

This is what sets apart simulation from a game; with this, you’ll start picking up the very smallest pieces about everything involved within the rather terrifying – yet amazing – world of space flight.

If you compare this to some of the most recent mods out there, that have tried to move into the space world bit by bit, It’s really easy to see where they get their inspiration from.

Despite having never heard of Orbiter when I was younger, I’m kind of glad that I didn’t as it would have probably sucked me up into a time vortex of its own! It’s hugely addictive, even today with so much modern choices waiting for you.

It might be a bit limited in comparison to its modern brethren, but in terms of what it brought to simulation as a whole, I’m not sure I’ve seen a more effective piece of hardware.

I am a volunteer at the Cradle of Aviation in NY. I maintain our interactive flight sim kiosks. We have been running the Orbiter 2010 Space Flight Simulator and have issues with the hard disc. I am trying to reconstruct the program but it hangs at the Launchpad screen without automatically loading the Atlantis Final Approach scenario. Any suggestions?

If you're seriously interested in orbiting, come to Orbiter's homebase:

Sound must be downloaded separately, and it works very well. It's here: http://orbiter.dansteph.com/download/OrbiterSound35.php