After a lease to Dan Air this aircraft re-entered Alidair service in 1979. Later that same year it sprouted Scotland titles and a white fin. Requires the FSDS Viscount 700 model by Rick Piper. By Garry Russell. 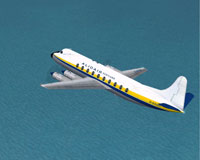 The archive v708as79.zip has 23 files and directories contained within it.