P3D Migration Our lab system has been migrated to P3D V4 and FSUIPC V5. This allows us better testing on P3D. Some testing capability will exist for FSX SE for a limited time. CrgSim "should" work with FSX, FSX SE, and P3D with FSUIPC V4 and FSUIPC V5.

P3D Migration
Our lab system has been migrated to P3D V4 and FSUIPC V5. This allows us better testing on P3D. Some testing capability will exist for FSX SE for a limited time. CrgSim "should" work with FSX, FSX SE, and P3D with FSUIPC V4 and FSUIPC V5.

STICKY NOTE:
Stopping "Themes" with the window task manager seems to consistently improve frame rates and smooth operation. If frame rates drop below 20 consider trying this out. It works on every one of the lab computers.

ANOTHER STICKY NOTE
Be sure to replace ALL of the old CrgSim modules with ones from this release. Mixing modules from different releases can (and usually will) have unexpected and undesirable results.

A new feature allows you to assign up to 40 ATC recordings (or whatever MP3 files you have) to 40 separate Com2 (configurable to Com1) frequencies so that when you select the proper frequency on your radio the ATC recordings starts playback. See the Sound Application note for more information. Download your ATC recordings from LiveATC.net.

Jean-Hugues Ancelin has most helpfully translated 14 of the CrgSim documents from English to French. The document set is available on the CrgSim website in the Download section. The latest translation download contains updates up to and including release 86. 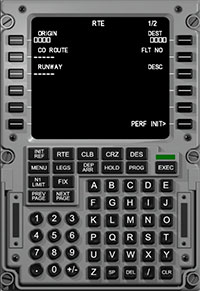 IMPORTANT: This release supports two annunciator modules called AnnunRight and AnnunLeft. If you currently use the annunciator it will be necessary to change the name of the configuration file from "CrgAnnun.cfg" to "CrgAnnunLeft.cfg". The distribution directory name has been changed from "Annunciator" to "AnnunLeft" and a new directory called "AnnunRight" has been included.

The EICAS and PFD documents have been split up so that each instrument has its own document.

The ComMgr accepts a configuration option that specifies the aircraft profile that is loaded when the program is started.

Brightness on each instrument may be customized with the following configuration option: brightness 1.0 where the brightness value may be between 0.0 and 1.5

The ADF frequency is no longer incorrectly replaced by the FMC.

The ADF frequencies now can be decimal MHz. 335.1 Instead of just 335. The decimal value is also displayed in the NavDisplay.

V1, Vr, and V2 values entered with the CDU are no longer incorrectly replaced with default values.

The database has been upgraded with more and newer entries for airports and ground stations.

Take off from Sydney, Heathrow, Atlanta, Charles-DeGaulle, or Frankfurt with maps turned on. Select map level 1 and you will see detailed maps of the area surrounding these airports.

There are 4 different scales for maps with 1 being the most detailed and 4 covering the most area. CrgSim maps do not exist for all areas of the world and in areas that they cover not all scales are available. Maps will attemps to show the most detailed chart requested. If you request a scale 1 map and the most detailed chart available is a scale 3 then Maps will display the scale 3 maps. If the aircraft flies into an area that has a more detailed map available then Maps will automatically switch to the more detailed map. You can change the requested map scale size by using the crgkey feature above or by selecting the map display and entering a 1, 2, 3 or 4 directly.

If you have a second screen available on your FSX computer and want to try to run CrgSim on the FSX computer look at the first few sections in the Documentation. It describes how to configure CrgSim on one screen.

This release contains support for the GoFlight MCP Pro, GoFlight EFIS, and GoFlight radio. The documentation contains instructions on how to install. Be sure that both sets of drivers (GoFlight and CrgSim) are NOT running at the same time. Wierd behavior of the MCP and EFIS will result. To test, do not start the CrgSim drivers and start up the system. If the MCP appears to still be working with the default 737 then the GoFlight drivers are still running. Disable them before running the CrgSim drivers.

IMPORTANT: When starting CRG if a message appears that a DX10 component or DLL cannot be found then run "directx_jun2010_redist.exe. This file can be downloaded from the Microsoft website (search on the file name). The file will unpack itself in the directory of your choice. Then in that directory run "Dxsetup". Your system will then support DX10.

Hope you enjoy this release.

The archive crgsim-0_087.zip has 256 files and directories contained within it.

How to install this?