Eurowings Airbus A319-100, "Johann Wolfgang von Goethe", registration D-AKNG. This is the Project Airbus A319 with Eurowings livery for FSX. The aircraft has a VC. By Marco Fischbach.

Eurowings Airbus A319-100, "Johann Wolfgang von Goethe", registration D-AKNG. This is the Project Airbus A319 with Eurowings livery for FSX. The aircraft has a VC. By Marco Fischbach.

Well, this is my first FSX repaint ever. In summer 1999 my family and

I we flew to Greece (LGTS) for holidays. I can remember that it was

great there, we had a good time! Also the flight was very comfortable.

is an FS2004 version. So this my FSX version for anyone. 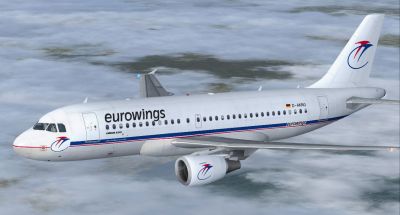 The archive fsx_pa319_eurowings.zip has 60 files and directories contained within it.