SkyTeam (Air France) Airbus A320-211. SkyTeam is an airline alliance and was founded in 2000. It has grown to become second largest airline alliance in the world (in passenger number terms and members). The alliance currently consists of thirteen carriers from four continents, one of them is Air France. Since 2011 Air France is operating an Airbus A320 in the colors of SkyTeam. The aircraft is VC equipped. By Marco Fischbach.

*testet with SP2 only

SkyTeam is an airline alliance and was founded in 2000 by Aeroméxico,

Air France, Delta Air Lines and Korean Air – the last of the three

airline alliance in the world (in passenger number terms and members),

behind Star Alliance and ahead of Oneworld. The alliance currently

consists of thirteen carriers from four continents, one of them is Air

France. Since 2011 Air France is operating an Airbus A320 in the 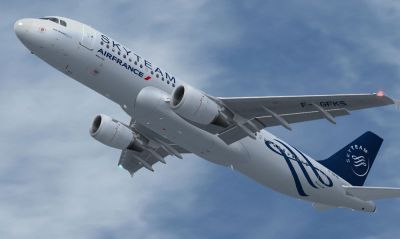 The archive fsx_pa320_skyteam__air_france_.zip has 51 files and directories contained within it.

Looks very good, but when i fly this plane, it's crashing in the air and i cant control it. on other planes i do not have this problem. please fix this asap.