Pretty In Pink Mooney. A repaint of the default Mooney Bravo entitled "Pretty in Pink" for Emily. Textures by Mark Rooks of RSDG.

Pretty In Pink Mooney. A repaint of the default Mooney Bravo entitled "Pretty in Pink" for Emily. Textures by Mark Rooks of RSDG. 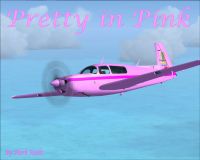 Pretty In Pink Mooney in flight.

2.Copy the " Emily's Pink FSX Mooney " folder and paste it in the main aircraft folder.

The Creations
(Airborne Version)
And the Lord God spoke forth unto the heavens and said "Let there be Airborne". The earth did tremble and quake, and the waters did rise up. The clouds did part, and there came forth a multitude of parachutes which filled the sky. God looked down and saw that this was good. And they were good, for they were AIRBORNE!!
God then spoke forth unto the land and said "Let there be Rangers". And all at once the day turned into darkness, and the winds did howl, and the mountains crumbled into the sea. The great rocks did part and there sprang forth a horde of Mephistopheles' disciples wearing Ranger tabs and carrying all manner of deadly weapons. God looked down and saw that this was bad. And they were bad, for they were RANGERS !!
Then God spoke forth thrice unto the sky, the earth and the sea, saying "Let there be Special Forces". Lightning did flash and thunder did echo across the sky. Mountains spewed forth molten rock and rained down fire upon the land. Tidal waves surged against the shore, and despair, disorder and turmoil did prevail. Forthwith, there did appear a band of twelve extraordinary men. A few came from beneath the waves. Others jumped from the skies, and still more stalked silently from the forests. Each one was in camouflage battle dress, wearing a green beret. Working together, they brought peace unto the land. God looked down and saw that this was amazing. And they were amazing, for they were SPECIAL FORCES!!
Besides himself, God now spoke forth and commanded "Let all ye that be weak in mind and body arise and go forth". And lo, from the abyss they crawled forth with indecision and limped weakly upon the earth. God looked down and saw that they were pathetic. And they were pathetic, for they were LEGS! !**
By Col. Robert K Suchke

The archive pipmb.zip has 6 files and directories contained within it.