Installation: unzip this file to your Microsoft Flight Simulator X folder. Make sure the option "use directories" is active, for the directory structure is contained within the .zipfile.

Many parts of this model have been derived from my earlier Piper models.

The model was designed in GMax. In the virtual cockpit I left out the pilot in order to facilitate looking around.
The door will open, as usual, using . First the door latches will open, together with the storm window, a small window within the window directly to the pilot's left, and then the door itself.
The bagage door will open and close by followed by <2>. The ribbon to keep this door in the open position is present too.
The gear has suspension, as can be seen when moving on uneven ground. The wheels will spin while taxiing.
Like in the real Arrow the trim surface at the trailing end of the elevator wil move extra as the elevator is moved.

The left yoke in the virtual cockpit made the engine instruments partly invisible, so I made it semi-transparent.

The panel instruments I made are in xml, they reside in the gauges\P28T.CAB and P28RT.CAB files.

I added a "16x9" panel; this is meant for use with a wide screen monitor. High resolution recommended.
The model was designed on a computer with two 24" 1920*1200 monitors.

The subscale of the altimeter will read both hPa (=mBar) and inches of mercury. The tanks will contain 36 Gal. each, and the fuel gauges will indicate "full" at that amount.

The annunciator panel is functional, as is the audio panel, on which sound of markers, nav 1 and 2, and ADF can be switched on and off.
The cockpit light and the navlights are toggled by left clicking the thumb wheel directly to the left left of the main power switch.
When turning the thumb wheel in the real PA28RT, there will first be a click switching the nav lights on, and the rest of the travel it will be a rheostat for the cockpit panel light.

dsd_xml_sound3.gau and dsd_sounds.cfg are parts of a bridge from xml gauges to c-based gauges.
Xmlgauges can't trigger sounds by themselves, so the xmlgauge generates a variable that is read by dsd_xml_sound3.gau, and it is by this (invisible) gauge that the soundfiles are called.
dsd_sounds.cfg is a helpfile for this. No need for GaugeSound.dll any more.
Doug Dawson made this bridge as freeware (thanks, Doug); it is not allowed to use it commercially without his consent.

A special word about the P-effect:

I placed the engine slightly to the right of the midline in the flight dynamics (aircraft.cfg and Piper Arrow-IV.air) to simulate the P-factor:

In the real aircraft the propeller turns clockwise as seen from the pilot's seat.
Therefore, the propwash will take a spiraling trajectory along the fuselage. It will collide with the vertical fin, pushing it to the right, thus causing the aircraft to turn left.
Moreover, a propeller blade that goes down will generate more thrust than one going upward because the former will have a higher speed with respect to the air and will have a larger angle-of-attack, caused by the propeller axis being more pitch-up than the aircraft path. This, too, adds to a tendency to turn left.

This so-called P-factor is compensated for cruise speed in the Cessna 172 with a bent strip of metal at the trailing end of the rudder; in the Arrow by the rudder trim, but the degree of correction will depend upon airspeed.
In situations in which engine power is high with respect to airspeed (takeoff, climb, recovery from stall) the pilot has to apply "right rudder".

1. The simpilot must have rudder pedals.
2. The pedal mechanism should have no mechanical play: its potentiometer should exactly follow the feet's movements.
3. In the settings menu the null zone for the rudder pedals must be set to zero. If the software that comes with the pedals allows for a null zone, it should be set to zero too.

Still, if you don't like the P-factor, open aircraft.cfg, find:

Which will place the engine in the midline.

All of my files are public domain; you are allowed to do with them whatever you please without permission and at your own risk.
The real turbo Piper Arrow-III N1927H is based at Rotterdam Airport and owned by Ben Weltevrede.
I cheated, for in fact N1927H is not the turbo version. G-BNNX is a genuine turbo, though, home based at Bristol, U.K.
Nick Harris provided some of the photographs I needed.

I did my best to test everything for mistakes and to repair any I found.
Given the complexity of an aircraft model, though, there won't be a guarantee.

Comment will be welcome, of course. Please state the name of the .zipfile, the site you downloaded it from and whether you have FS 9 or FS X. 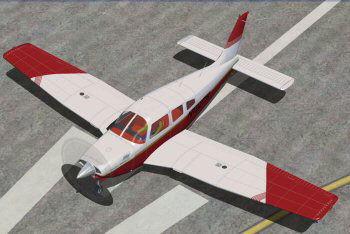 The archive x_pa28rt.zip has 59 files and directories contained within it.