Piper PA 28-201R-T Turbo Arrow. This is Hauke Keitel's Piper PA28 201 modified for Flight Simulator X. This aircraft has been modified to the specs of a Piper PA28-201R-T Turbo Arrow circa 1977 - 1980. The new flight dynamics were created to match the performance of real turbocharged Arrows. Flight dynamics and performance tested and evaluated by real pilots. This aircraft package has an improved 2D and VC cockpit with a new GPS. Package includes pictures and performance specs. Textures and updates by Mark Rooks of RSDG Aircraft. 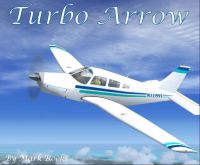 The archive pa28rt.zip has 7 files and directories contained within it.