Repaint of vampupxa.zip of Langley Museum Enclosed is a repaint to attempt to reflect DH-100 Vampire currently in Canadian Museum of Flight, Langley, BC collection by Josef of FSXTipline.blogspot.com. Sadly I wasn't able to get the labels right, but photoshopped from several photos nose paint + tail boom letters. Created in Abacus Repaint V2 By Josef of FSXTipline.

Canadian Museum of Flight, Langley, WA by Josef K (josefk@wavecable.com) repaint of Bob Chicilo's vampupxa.zip using some help from Ed DesRoches' repaint of FS2004/2002 RCAF DeHavilland DH-100 Vampire 17071 for the City of Vancouver Squadron. The aircraft is meant to reflect to the best of my ability - and I'm still not happy several weeks after embarking on this project - the DH-100 Vampire in the collection of the Canadian Museum of Flight, Langley, BC.

INSTALLATION:
Extract the texture.Langley folder to your DH100 Vampire F3 folder under SimObjectsAirplanes.

Then open your aircraft.cfg, select the text between the dashes, paste at the end of the fightsim/aircraft list, and finally please change the XX in [fltsim.XX] to the next number available in sequence in your .cfg file. After that, go fly!

Its Badge, a representation of Haietlik or Lightning Snake. According to legend of the Nootka Tribe of Indians, Haletlik was dispatched to kill its enemies.

Background: The War Years
On arrival at Digby in February 1944 for service in Europe, No. 14 Squadron, RCAF was renumbered as No. 442. In March it moved to Holmesley South, exchanging its initial Spitfire Mk VB's for Spitfire Mk IXB's and becoming part of No. 144 Wing, 2nd TAF (Tactical Air Force). Operations over Europe commenced at once, several airfields along the south coast being used, the wing flying from From from mid May until the 15th of June, when it moved to Normandy at St. Croix-sur-Mer. Air superiority patrols contained with some success until mid July, when the wing was disbanded and the unit moved to 126 Wing. There was little change to the form of operations undertaken and in September the wing moved forward to Evere in Belgium, where Spitfire Mk IXE's replace the Mk IXB's. October saw a move to Holland, but in March 1945 the Squadron returned to the UK, re-equipping with the North American Mustang Mk III at Hunsdon and commencing bomber escort sorties over Germany, claiming several aerial victories late in the war to raise the unit's total to 53 victories. During this period the Squadrons' aircraft carried the unit code Y2.

Background: The Cold War
Reformed as No. 442 'City of Vancouver' (F) Squadron (Auxiliary) at Sea Island on 1 April 1946 and equipped with Harvard, Vampire and Sabre aircraft. Disbanded on 31 March 1964.

Background: Unification
Reactivated at RCAF Station Comox on July 8, 1968 a 442 Transport and Rescue squadron, initially equipped with the Albatross and then the CC-115 Buffalo and CH-113 Labrador.

Background: The Present
No. 442 Squadron remains at CFB Comox as a Transport and Rescue squadron and is currently equipped with the CC-115 Buffalo and CH-149 Cormorant. 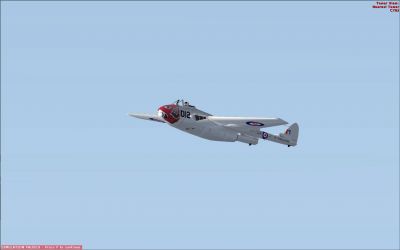 The archive langleyvampire.zip has 33 files and directories contained within it.