Argentinian Navy S-55. This is a repaint of the freeware Alphasim Sikorsky S-55 in the colors of the Argentinian navy. Textures only; requiers ALPHS559.ZIP. By Henry William. 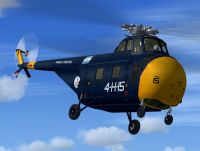 A) Extract the content of this file on your prefered location.
B) Copy and paste the "texture.armada" in the folder where you have the Alpha Sikorsky s-55 Usually this path:

D)Open the aircraft.cfg file and paste the following after the last number in your entry. Where you se an XX, reemplace this with a number as said after the previous number:

[fltsim.xx]
title=Sikorsky S-55 Armada
sim=s55
model=2
panel=
sound=
texture=armada
kb_checklists=S-55_Checklist
kb_reference=S-55_Reference
prop_anim_ratio=-1.30
ui_manufacturer=Westland
ui_type=Whirlwind
ui_variation=Armada Argentina
ui_typerole="Utility helicopter"
ui_createdby="AlphaSim Ltd"
atc_id=XJ421
atc_heavy=0
atc_airline=AIR FORCE
atc_flight_number=XJ421
description=AlphaSim 2007\n\nThe S-55 started life as the venerable military version and first flew in 1949. The S-55 served with the USN as the H04S, the Air Force as the H-19 and the Marines as the HRS. Commercial certification was awarded in 1952 for the S-55. Initial engines were P&W Wasp Radials, later variants had the P&W R-1300 and later still the P&W R-1340.\n\n UK versions were built under license and 400 examples were produced as the WS-55 Whirlwind, these later featured the Rolls Royce Bristol Gnome engine turbine, a replacement for the original Alvis radial engine. France and Japan also had a license for S-55 construction. Total production globally stands at 1281 airframes, the majority of which are for the US services. 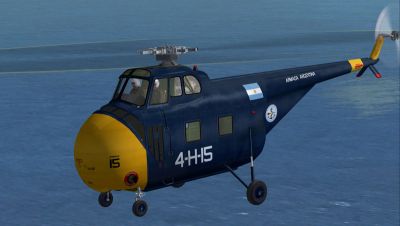 The archive arm_s55.zip has 18 files and directories contained within it.