A) Extract the content of this file on your prefered location.
B) Copy and paste the "texture.faa" in the folder where you have the Alpha Sikorsky s-55 Usually this path:

[fltsim.xx]
title=Sikorsky S-55 FAA
sim=s55
model=2
panel=
sound=
texture=faa
kb_checklists=S-55_Checklist
kb_reference=S-55_Reference
prop_anim_ratio=-1.30
ui_manufacturer=Westland
ui_type=Whirlwind
ui_variation=Fuerza Aerea Argentina
ui_typerole="Utility helicopter"
ui_createdby="AlphaSim Ltd"
atc_id=XJ421
atc_heavy=0
atc_airline=AIR FORCE
atc_flight_number=XJ421
description=AlphaSim 2007\n\nThe S-55 started life as the venerable military version and first flew in 1949. The S-55 served with the USN as the H04S, the Air Force as the H-19 and the Marines as the HRS. Commercial certification was awarded in 1952 for the S-55. Initial engines were P&W Wasp Radials, later variants had the P&W R-1300 and later still the P&W R-1340.\n\n UK versions were built under license and 400 examples were produced as the WS-55 Whirlwind, these later featured the Rolls Royce Bristol Gnome engine turbine, a replacement for the original Alvis radial engine. France and Japan also had a license for S-55 construction. Total production globally stands at 1281 airframes, the majority of which are for the US services. 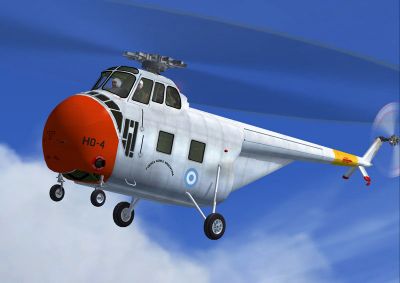 The archive faa_s55.zip has 16 files and directories contained within it.