Pan Am Dornier Seastar. A "what if" livery of the Premier Aircraft Design Dornier Seastar in Pan American colors. Textures only, requires SEASTAR_3_X.ZIP . By Josef A. Kunzlar of FSXTipline.

Dedicated To…
Mary Kirby of Runway Girl who’s a friend and a great avgeek blogging & reporting about aircraft interiors. She really likes seaplanes as well.

Installation
1. Install the separately provided Premier Aircraft Design Dornier Seastar:
2. Place the texture.PanAm folder into the seastar_3_x folder under Simobjects/Airplanes in FSX.
3. Paste the below into your aircraft.cfg where X = the next number in your file:

4. By all means, select this aircraft in FSX and go flying…

A Backstory…
Back in the day when there was a real Pan American World Airways – aka & hereafter Pan Am – and flying was always romantic, Pan Am started out with seaplanes and had a nice winged logo on the noses of their seaplanes (which is reproduced in the final aircraft repaint). Although Pan Am moved along to jetliners and even bought (gasp!) Airbuses alongside their Boeings, they still occasionally named their aircraft Clippers.

So when I saw Simviation have a contest for screenshots of freeware amphibs plus the work of Premier Aircraft Design plus the work of Captain Dave the FS Lightman resurrecting various aircraft as PanAm aircraft including the Boeing 787, I decided to make my own Pan Am Clipper. I did though decide to pay homage equally to the Boeing 707s about to star in the American ABC drama as much as the old sea planes that Pan Am started with. Granted, PanAm didn’t embed the registry number into the blue racing stripe but due to the fact occasionally PanAm would change livery I figure I have the artistic license to do so. Especially since the way the racing stripe is placed traditionally through the windows left insufficient room to respectably slide in a registry number, I’m sure you’ll like what I did. I would have added Old Glory as well, but I wasn’t happy with the quality of a small US flag on the Seastar tail.

Yup, “Back to the Future” my friends. Complete w/ the Pan Am logo on the tail of the Dornier Seastar, the Clipper nametag, the freeware Pan Am font, and Pan American above the blue racing stripe… enjoy! 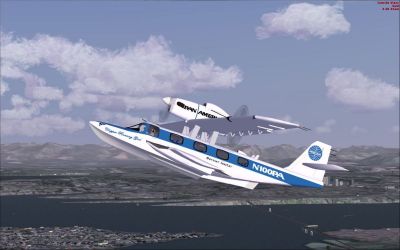 The archive panam_texture_4_pad_seastar.zip has 38 files and directories contained within it.