Gulfstream Project Aircraft. This is the Peter Brun/Lider Designs Gulfstream Modified for Flight Simulator X. This aircraft is painted in plain white project texture, a good starting point for any Gulfstream 100 project. Created with easy to use BMP textures and includes an easy to follow tutoria...

Gulfstream Project Aircraft. This is the Peter Brun/Lider Designs Gulfstream Modified for Flight Simulator X. This aircraft is painted in plain white project texture, a good starting point for any Gulfstream 100 project. Created with easy to use BMP textures and includes an easy to follow tutorial. Blank textures and updates by Mark Rooks of RSDG Aircraft. 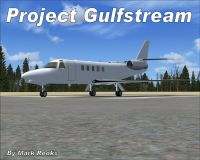 There is no VC the 2004 gauges do not work in FSX the original panel is included if you would like to rebuild the original aircraft has a default lear 45 panel.

2.Copy the " Project Gulfstream " folder and paste it in the main aircraft folder.

The archive g100p.zip has 9 files and directories contained within it.