Gulfstream 100. This is Peter Brun/Lider Designs Gulfstream 100 modified for Flight Simulator X. This business jet is the smallest of the Gulfstreams and sports a typical paint scheme. Updates by Mark Rooks of RSDG Aircraft.

Gulfstream 100. This is Peter Brun/Lider Designs Gulfstream 100 modified for Flight Simulator X. This business jet is the smallest of the Gulfstreams and sports a typical paint scheme. Updates by Mark Rooks of RSDG Aircraft. 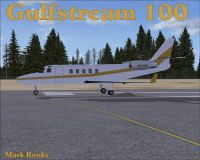 The archive fsxg100.zip has 7 files and directories contained within it.