Eclipse 500 VLJ. This is not native FSX but the FS2004 version updated for FSX. Base model by Dave Eckhert. Original .cfg and .air files by John Cillis. Updates by Andrew Randall.

Eclipse 500 VLJ. This is not native FSX but the FS2004 version updated for FSX. Base model by Dave Eckhert. Original .cfg and .air files by John Cillis. Updates by Andrew Randall.

Enable "Word Wrap" if viewing this readme in Notepad.

This is the FSX version of my Eclipse 500. It is NOT native FSX but the FS2004 version updated for FSX. So many aircraft claiming to be for 'FSX only' are merely 'ported over' FS9 versions. (You can tell by the textures using .bmp instead of .dds with no spec or fresnel ramp texture. Also you cannot see the autogen trees through the glass cockpit. Clouds can also appear to be in front of the prop on prop planes. Just thought I'd pass that info on in case you didn't know.)

I have updated the .cfg file for FSX camera views. The model itself is not as frame rate freindly as the default FSX aircraft or indeed those that were purely built for FSX, however one can easily achieve 20fps, as on my rather old (2004 Pentium 4) machine, if not flying from a complicated airport like Heathrow.

Credit goes to Dave Eckhert for his base model of the Eclipse and to John Cillis for the original .cfg and .air files. Also for John's invaluable info and help.

*PLEASE NOTE*
Because of the camera views in FSX I added a head to the pilot. This means your eyepoint is inside the pilots head. This will stop you from operating the switches and controls in the VC. You can either move to the right hand seat by pressing 'A' or move your eyepoint forward by pressing CTRL+BACKSPACE seven times. Having done this you will see parts of the pilots headphones when panning round to the rear, this is normal. To reset your eyepoint press CTRL+SPACE.

If you have my earlier FS2004 model, the above will also apply except pressing 'A'. (In FS2004 I use the 'F1 View' utility to 'scroll' around the VC negating the need for CTRL+BACKSPACE).

Below is copied from John Cillis's original Readme:

The aircraft should rotate nicely with one notch of flaps @ 89 kts. I set the initial climb speed/climb rate at 225KIAS/2000 fpm. I maintain this speed throughout the climb, tapering the climb rate off to 700-1000fpm above FL270.

I cut the throttle to maintain approx a 2000fpm descent. This should keep indicated airspeed in the 230-240kt range.

I approach with full flaps and approx 100-110kts airspeed. The Eclipse will touch down nicely at between 75-80 kts. There are no reversers, but it should easily stop on a 2500 ft. runway if you touchdown at the right point.

Above from John Cillis but actual speeds may vary as my loading is different. Once the undercarriage is down this slows the plane acting as a speed brake as in the real aircraft.

In addtion to this you can slow the plane by pressing the spoiler key ' / '. There is no animated spoiler on this model. One day maybe when I've actually seen what they look like! I have been reliably informed that the tail cone opens as a speed brake on the real aircraft.

I personally land the plane by pressing the F7 key once or twice, I find this enough flap and can land comfortably at between 110 - 135 kts. If you get your airspeed correct on approach you can even land without flaps.

Un-zip the file to a temporary folder and copy or move the entire 'Eclipse 500 VLJ' folder to your FSX / Simobjects/ Airplanes folder.

The panel uses the Lear 45 and other default gauges.

Gauges are inside the panel folder, you can leave them there, FS doesn't mind.

THIS AIRCRAFT MAY NOT BE SOLD, EITHER FOR PROFIT OR FOR NON-PROFIT. IN OTHER WORDS, NO MONEY CAN BE SOLICITED FOR ACCESS TO THIS AIRCRAFT PACKAGE WHETHER ALONE OR AS A COMPILATION WITH OTHER WORK.

Hope you enjoy flying this aircraft as much as I enjoyed modifying/building it. 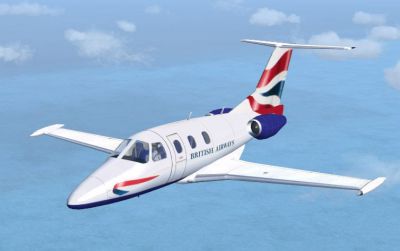 The archive xclps500.zip has 69 files and directories contained within it.

is great airplane i have this plane in x plane 10

There are no spoilers on the Eclipse Jet. I fly one for a living, tail number N502ET. The only thing you have to slow the airplane down in the air with are the flaps...