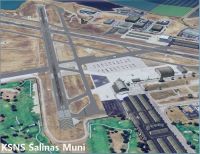 REQUIREMENTS:
CCFSXMSG must have been installed for this scenery addition to work since many textures, etc. are shared.

FSGenesis USA 9.6m Terrain Mesh for FSX V2 by Justin Tyme and a mesh resolution setting of 5m or at least 10m is also required for this scenery to display properly.

I don't include scenery for the KMRY Monterey Peninsula airport since Eric McCloud recently released an excellent version of that airport that meshes perfectly with MegaScenery Earth.

There are several ways to install the files. Shown below is the way I believe is the easiest. Your FSX drive and path is probably different than mine so I do not show the entire path below. If you used the default FSX installation path, where I indicate "FSX" you would use "Flight Simulator FSX" directory. In any case, it's where the FSX.EXE is located.

3) If not already installed, install Eric McCloud's KMRY Monterey Peninsula scenery per his Readme.TXT instructions and assign his scenery priority to a higher priority than the MegaScenery Earth California scenery. See NOTES: KMRY below.

This completes the installation of the CCNFSXMSG scenery except for the optional flight (.FLT) files.
See NOTES: FLIGHTS regarding those.

KMRY:
Eric McCloud suggests using a mesh resolution setting of 76m with his KMRY Monterey Peninsula scenery. Much of the scenery in CCNFSXMSG and CCFSXMSG involves small airstrips in rolling hills that required a lot of detailed terrain sculpting. For that to look right a mesh resolution of 5m or at least 10m is required. Therefore, included in this scenery is a small file that will minimize any terrain problems near KMRY when using FSGenesis mesh terrain and high (5m or 10m) mesh resolution settings. This file in no way detracts from or modifies McCloud's scenery.

CROSSWIND R/W:
There are three airports in this scenery (KSNS, KWVI and 3O7) with crossing runways. I have enabled them for crosswind traffic in order to utilize the multiple runways for AI traffic. When such an airport has a tower as KSNS does this procedure makes a mess of ATIS transmissions. Therefore, if you'd prefer not to have KSNS crosswind enabled I have included replacement AFD files that remove the crosswind feature for KSNS only. They are included in the KSNSAFD/Normal directory. Just copy them into the CCFSXMSG/Scenery directory allowing overwrites. Copies of the original Xwind AFD files are in the KSNSAFD/Xwind directory if you decide to go back to the Xwind feature at KSNS. KWVI and 3O7 do not have towers or ATIS so there is no downside to their using the crosswind feature.

AI FLIGHT PLANS:
The land based flight plans included with this scenery utilize only default FSX aircraft to keep them universally useable. The AI float planes I used are ZZZA Floatplane Aviat Husky and ZZZA Floatplane Waco Classic from Holger Sandmann's ai_float.zip that I recommended that you install in the CCFSXMSG readme file. If you don't want to use these flight plans you could remove or disable the Traffic_NCC_FSX.BGL file that's now in the CCFSXMSG/Scenery directory but with only the default AI you'll have minimal to non-existent AI traffic at the 10 Public Airports and none at the 10 airstrips in this release.

The AI flight plans consist of 60 AI flights originating at 20 CCNFSXMSG airports/airstrips (excluding the 53CA heliport). There are departures beginning at 00:00Z that repeat every 2 hours. In order to have some control over the level of CCC AI flights I assigned Active Level percentages as follows:

Airstrip Notes: Some airstrip parameters (runway heading, length, width, surface etc.) do not agree with FSX default data but were determined by matching satellite textures. All these strips are probably restricted or closed but are usable in FSX for AI and/or free flight.

Display settings I'm using:
I don't like autogen buildings when flying photoreal scenery. They don't look realistic to me at altitude and are frequently poorly placed and I have fairly appropriate structures placed on or close to airports in this scenery. Therefore I edit my FSX.CFG file as follows: TERRAIN_MAX_AUTOGEN_BUILDINGS_PER_CELL=000. This kills all autogen buildings without disturbing autogen trees or surf.

These settings are not suggestions or even recommendations but what works for me on my middle of the road system. 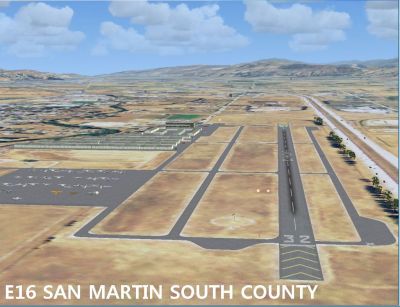 The archive ccnfsxmsg.zip has 139 files and directories contained within it.