This is a beautiful "Photo Real" Scenery redesign of the FSX Default KJFK airport using the latest version of ADE (v01.50.11) & SBuilderX scenery design tool. I have added more airport buildings and Photo Real ground textures to the default scenery to give the airport a more realistic feeling. I also added the New American Airlines and Jet Blue terminals, the parking garages, several warehouse buildings, more gates, and several other little scenery enhancements. The runways and airport aprons are aligned to match Google & Yahoo satellite imagery. I increased the width of Runway 31R/13L by 200 feet to reflect the 2011 JFK Bay Runway expansion project. The AFCAD has all 4 runways active, using the crossing runways technique. I hope you enjoy the scenery. Your feedback is welcomed.

1. Deactivate the KJFK_Photo_Real in the settings, scenery library tab.

* The gates at Terminal 4 are unassigned. I left these gate assignments blank because I find that the AI traffic tends to use all of the gates for parking instead of having gates sit empty for long periods of time. You can edit the AFACD file for more realistic International AI parking assignments at Terminal 4.
* Most of the scenery objects are visible at the "Dense" level so you might see an impact on frame rates if you have a slower computer.

*I hope you enjoy the scenery. Your feedback is welcomed.*

*Thanks to Jon Masterson (a.k.a. Scruffy Duck) for his Airport Design Editor Utility v1.51.
*Thanks to Luis Féliz-Tirado for his SBuilderX scenery design tool. 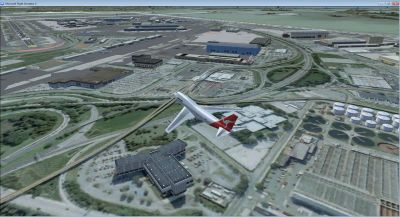 The archive kjfk_pr_fsx.zip has 51 files and directories contained within it.

As an airport that I spend a lot of time reading about and writing about for various publications, I’ve always had a real desire to go and visit the JFK Airport. It’s one of those places that I would rather go and see compared to somewhere like Los Angeles; it holds more significance to me.

To make up for my lack of never being, though, I have spent hours reading, watching and learning about this airport and everything that makes it such a key part of the USA. When I found this package, I thought it could be my compensation.

Given the fact that it manages to capture so much detail and depth in the one place, I have to say that it definitely has done that for me! The photorealistic scenery manages to capture the airport and totally replace the old one, making it look far more developed and refined than it did in the past.

More buildings are added in here, too, as well as a whole range of the best default scenery packages possible to make the whole airport look as realistic as it possibly could.

It also comes with parking garages, warehouse buildings and gates added in to make the whole place have that secure feeling to it, as it should in the real world. These little features and additions do a lot for making the airport look as it should, with alignment from Google and Yahoo satellite imagery used to make sure it all sits where it should.

The whole range of minor adjustments and additions tally up perfectly with the major changes, making the whole thing look far more authentic than it did in the past; now, it looks like all of the pictures that I have seen of the airport previously!

The one thing that I was a bit let down by was the fact that terminal 4 sits totally unassigned and is only used rarely by the AI; however, the reasoning is quite sound. The airport has to have a specific way for the aircraft to get in and park up effectively, and the best way to do this is to leave the terminal more or less unassigned. You can adjust this if you want to, but I actually got used to this fairly quickly so it’s not really a deal breaker and does not really affect the airports atmosphere too much.

The rest of the scenery, however, is spot on. The depth of the detail and the range of different textures and buildings included really do make this look like the international hub that is, making it much easier to come here and land whilst feeling nice and comfortable when doing so.

This is a brilliant airport to come and visit, and also fits the scale that it should which makes it even more fun to fly to and from; it’s rather grand in its size and, with this mod package, you can really make up for either not being here or not appreciating the original JFK Airport FSX enough!

Is this scenery up to date?

Love it, man! Great job! This is payware quality!

Hi. Help required activating this addon please. I downloaded this addon and copied the KFJK Photo real folder into the FSXaddon scenery folder as instructed, but when I go to the settings, scenery library & insert the path it isn't recognised. Do you have any suggestions please. Many thanks Bob

HI... I want to know if you have the canarsie approach on this file in jfk virtual .

Very good for a freeware scenery