This is a reissue of Paul Clawson's Vultee BT-13 Valiant first introduced in late 2005 with many improvements and all new textures. Included are four paint schemes: a Malden AAF 1943, a pre-war 1941 yellow/blue colors, a Navy version rendered as the currently flyable model owned by Mid Atlanti...

This is a reissue of Paul Clawson's Vultee BT-13 Valiant first introduced in late 2005 with many improvements and all new textures. Included are four paint schemes: a Malden AAF 1943, a pre-war 1941 yellow/blue colors, a Navy version rendered as the currently flyable model owned by Mid Atlantic Air Museum, and a factory fresh clean and shiny version. The original offering has been reworked to include many performance improvements and upgrades including updating to allow installation into FSX. A paint kit is also included. Original textures and model by Paul Clawson. Repaint by Chuck Lawsen.

Screenshot of Vultee BT-13 in flight.

This is a reissue of Paul Clawson's Vultee BT-13 Valiant first introduced in late 2005 with many improvements and all new textures. Many performance enhancements and some modeling corrections have been made including:
~ Improved braking.
~Improved steering on the ground.
~Fixed the tendency to shake side to side while sitting on the ground.
~Fixed the problem that the engine would quit while sitting on the ground at minimum throttle.
~Fixed the rear pilot’s left arm from sticking outside the airframe.
~There are now 3 flap angle settings instead of just one.
~New 2d panel.
~Completely new spinprop texture rendering a much more realistic appearance.
~All new textures with accurate panel lines and rivet placements made by taking dozens of photographs of the BT-13 at Pima Air Museum in Tucson, AZ. The textures have a 3d effect created with highlighting and shading techniques I’ve learned since my first rendition of a trainer from Malden AAF I created in 2006.

This project was a result of a desire to learn how to make a proper spinprop texture. In 2006 when I published my first repaint of a Malden trainer (inspired from wanting to recreate a trainer my dad flew in 1943; I made this from 2 small wallet photos taken in then! ), I repainted the prop not knowing it needed some added transparency, the result looked hideous because the prop looked almost solid. Last year I decided to learn how to correct the problem and as a result created a number of new spinprops for many different aircraft that were all published in Dec. 2009. Since then, I decided to not just publish a fix for the 2006 repaint, but completely “overhaul” the textures and fix the performance issues. So here are 4 new paints, including a very accurate rendition of the Malden trainer with corrected markings and art work (the crest on the sides of the fuselage) thanks to Barbara Crayne of the Malden Air Museum for providing digital photos of the 1943 cadet album. I made the Malden paint look dirty and beat up with dents, grime, and a dull look. The 1941 blue/yellow paint along with the Navy paint of the model, owned and operated by the Mid Atlantic Air Museum, have a slightly “used” look; and finally a “Factory Fresh” version clean and shiny (make sure that reflective textures enabled in the sim). Also included are files to be able to import into FSX. Many thanks to Paul Clawson for helping with this “overhaul” by providing an all new model file and the necessary adjustments to the aircraft.cfg file for modeling corrections and performance enhancements. Paul also made corrections to the model to allow transparency in the spinprop and corrected the glass texture so the aircraft can also be installed in FSX as well. I”ve even included a paint kit of my textures for repainting using Photoshop or Photoshop Elements. This project took me many long hours over a period of 2 months to complete working it in around my work and personal schedule. I only wish my dad could see this new version, but fortunately he was still alive in 2006 and he cherished a screen shot I made for him of the original version. In his memory, note I replaced the pilot's face on the Malden paint with his, that way whenever I fly it he's with me too! Enjoy!

Unzip to desktop and open the folder “BT13”, inside you will find folders named FS9 and FSX, this readme, and some images.

FS9 : Open the folder with the same name and simply copy/paste the folder named “Vultee BT-13a” into the “Aircraft” folder inside the main FS9 folder which is located here (unless it is in another drive other than “C”): “C:Program FilesMicrosoft GamesFlight Simulator 9Aircraft”, overwrite when prompted.

FSX: First, install the “Vultee BT-13a” folder from the FS9 folder in this package here: “C:Program FilesMicrosoft GamesMicrosoft Flight SimulatorXSimObjectsAirplanes”. Now open the folder “FSX” and copy/paste the contents into the newly installed “Vultee BT-13a” folder inside the “Airplanes” folder, the string is: “C:Program FilesMicrosoft GamesMicrosoft Flight SimulatorXSimObjectsAirplanesVultee BT-13a”, overwrite when prompted (this will install an aircraft.cfg that includes camera views, a sound file that aliases to the DC3, and thumbnails so you see an image when selecting the aircraft).

Note: I've tested this aircraft and all displayed and operated normally on my PC. Use at your own risk. I take no responsibility for any harm to your PC or files claimed due to their use. 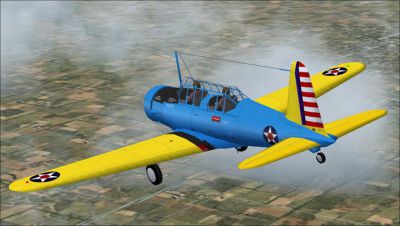 Screenshot of a blue and yellow Vultee BT-13 in flight.

The archive bt13a.zip has 70 files and directories contained within it.

An easy-peazy trainer! Good 'pit and stable. Outside view is somewhat obscured due to the canopy framework. I usually fly with canopy open anyway.