Screenshot of Boeing B-17 Flying Fortress F-BEEA in flight.

B-17G-105-EV No. 44-85643: Purchased by the IGN December 12, 1947, registration F-beea, it flew its first mission in the south of France in June 1948, he participated in Kubick film "Dr. Strangelove" in 1962 for the aerial. Scheduled to be retained parallel F-BGSP it is preserved in its colors and its equipment with IGN. On July 26, 1989 the aircraft was probably surprised Turbulance by the F-AZDX plane crashed on take-off, there are no victims. He was involved with the F-BGSP the second shooting of Memphis Belle in Binbrook. A photo of the plane flame exists on the internet.

This download requires the previous installation of FS-Cast Boeing B-17G package for FSX.

1. Unzip F-BEEA.zip to a temporary folder, ensuring that you retain folder names.

2. Within the download, move the texture folder 'texture.F-BEEA' to the folder 'FSC_B_17' within your 'Microsoft Flight Simulator XSimObjectsAirplanes' folder.

3. Open the aircraft.cfg with a text editor. Enter the following section under the last [flightsim.XX] entry, numbering it sequentially: 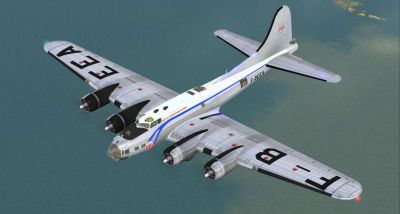 Screenshot of Boeing B-17 Flying Fortress F-BEEA in flight.

The archive f-beea.zip has 17 files and directories contained within it.