Announcing the Ju 87 Stuka by PRE-Flight RC Simulator.  The Junkers Ju 87 Stuka (from German Sturzkampfflugzeug, "dive bomber") was designed from the beginning, as a dive bomber and this role it performed brilliantly. It was capable of very precise bombing - diving up to 90-degree angles then automatically pulling out of the dive after bomb-release. This automatic feature was required as pulling out from the 600kph-plus dive usually blacked-out the pilot.

The Stuka was a true "terror" weapon and was equipped with a specially designed siren (nicknamed the "Jericho Trumpet") which, combined with the normal scream of the BMW engine, produced the characteristic and (for surviving victims) unforgettable sound preceeding the usual deadly, pinpoint-precision bomb explosion.

This super scale PRE-Flight model of the Stuka has highly detailed weapons and moveable controls. As usual with PRE-Flight models, the Stuka can be "painted" to reproduce many different paint jobs as the Stuka found service in almost all fronts. 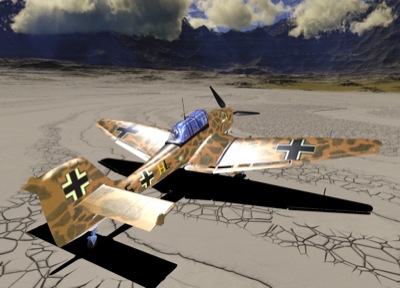