A fictional repaint of the default B737-400. Features very close attention to detail, completely repainting from scratch the fuselage, tail, and engine cowling. Includes reflective detail. This is Northwest Airline's new brushed silver paint scheme that they have recently applied to their aircraft fleet replacing their old grey and red paint scheme.

If Northwest Airlines decided that they were to include 737s into their fleet of aircraft, perhaps this paint scheme is what would result seeing. Although Northwest Airlines does not have utilize any kind of Boeing 737, I have created this repaint as a fictional "what if." I hope you thoroughly enjoy it!

This is Northwest Airline's brand new brushed silver paint scheme that they have recently applied to their aircraft fleet replacing their old grey and red paint scheme. I am really impressed by the new look of Northwest, which in part is what has inspired me to do this work. 734nw_1 is simply a repaint of the default 737-400 included with Flight Simulator 9.0 (2004) and therefore no pre-downloaded aircraft is necessary to use it. However, I have paid very close attention to detail, completely repainting from scratch the fuselage, tail, and engine couling of the airplane. Includes reflective detail.

[fltsim.*] <- - - - the * is replaced with your new folder number
title=Boeing 737-400 Northwest Airlines
sim=Boeing737-400 <- - - - kept the same
model= <- - - - left blank
panel= <- - - - left blank
sound= <- - - - left blank
texture=* <- - - - the * is replaced with your new folder number
kb_checklists=Boeing737-400_check <- - - - kept the same
kb_reference=Boeing737-400_ref <- - - - kept the same
atc_id=N16301 <- - - - you may change this tail number later inside the game if you like
atc_airline=Northwest <- - - - I don't know if the default FS2004 supports this call sign or not. I use EditVoicePack for my custom airliner callsigns.
atc_flight_number=402 <- - - - you may change this flight number later inside the game if you like
ui_manufacturer=Boeing <- - - - kept the same
ui_type=737-400 <- - - - kept the same
ui_variation="Northwest Airlines"
description=One should hardly be surprised that the world's most prolific manufacturer of commercial aircraft is also the producer of the world's most popular jetliner. The 737 became the best-selling commercial jetliner worldwide when orders for it hit 1,831 in June 1987 (surpassing Boeing's own 727 as the previous champ). However, it wasn't always that way\s in the first few years of production, there were so few orders that Boeing considered canceling the program. They didn't, and the airplane has more than proven itself in over three decades of service. 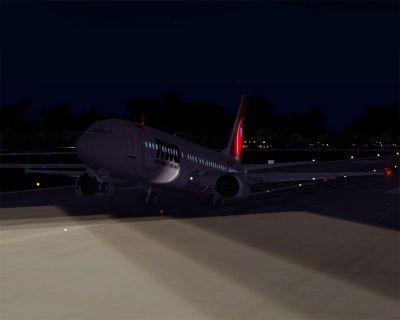 Northwest Airlines Boeing 737-400 taking off from runway at night.

The archive 734nw_1.zip has 9 files and directories contained within it.