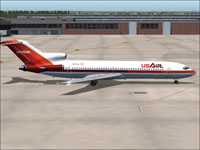 USAir began as All American Aviation in 1939 serving small communities in western Pennsylvania and the Ohio Valley. in the early 1950's the company changed its name to Allegheny Airlines. Later merging with Lake Central and acquiring Mohawk became a large national carrier and one of the largest airlines in the world when measured by passenger boardings. In 1979, to reflect its expansion efforts as a result of deregulation to offer coast to coast services, the company's name changed again, and USAir was born. Today,with the integration of PSA and Piedmont in the mid to late 1980's and now re-named US Airways, this major international US based carrier has a growing presence in the Caribbean and Europe with major hubs at Pittsburgh, Charlotte and Philadelphia.

USAir early 1980's bare metal fuselage repaint day and night textures for the Aardvark 727-200 model. You must have the original base model!

The archive us7swtv2.zip has 7 files and directories contained within it.