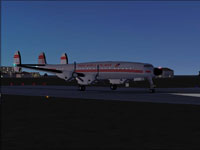 TWA Lockheed 1049G-82 Super Constellation N7121C"Star of Aberdeen", C/N 4648 TWA L1049G's were operated also without the 609 gal.tip-Tanks."Star of Aberdeen" was one of the planes in this configuration(1957-1963). One of the 102 model G built by Lockheed and also one of the 28 "G" take in charge by TWA, first operator in number of the type and also historical operator of the "Conny"in all his versions.

The archive l497121c.zip has 37 files and directories contained within it.