This is a repaint (textures and model only) of Tom Gibson's and Greg Pepper's Gmax DC-6B in the colors of Canadian Pacific Airlines in the late 1960s. Repaint by Wayne Tudor.

This is a repaint (textures and model only) of Tom Gibson's and Greg Pepper's Gmax DC-6B in the colors of Canadian Pacific Airlines in the late 1960s. Repaint by Wayne Tudor. 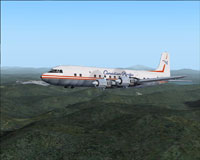 It was produced using the DC-6 Paint Kit. You must have Tom and Greg's DC-6B to use these textures. These textures also require the dc6bv2 model (included) for the prop spinners.

This aircraft, CF-CZQ, is depicted as it appeared in service with Canadian Pacific Airlines in the late 1960s. The CP DC-6Bs originally operated from Vancouver to Australia and New Zealand via Honolulu and Fiji. They probably had the CB-17 engines and long range fuel tanks.

If you have your DC-6Bs segregated into CB-16 and CB-17 engine versions do the following:

The archive cp_dc6b.zip has 32 files and directories contained within it. 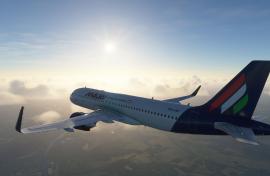